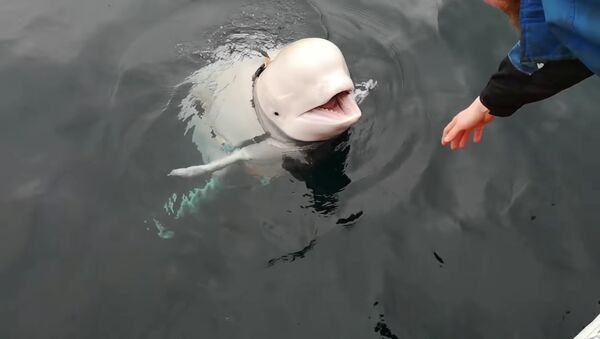 © REUTERS / Jorgen Ree Wiig/Norwegian Directorate of Fisheries
Subscribe
An adorable and unmistakeably tame white beluga whale wearing a harness found off Norway's coast has stirred panic and has even been accused of being a Russian spy.

The story of the white whale discovered off the coast of Finnmark in April, which the Norwegian media instantly labelled a "Russian spy" and even dubbed Hvaldimir ("Whaledimir") in a nod to Vladimir Putin, has acquired an unexpected continuation.

"Whaledimir" the "spy whale" is in fact Semyon and works as a therapy animal for disadvantaged children in Russia, the fisheries newspaper Fiskeribladet claimed.

"The whale in Finnmark has probably escaped from a Russian therapy facility near the Norwegian border", Morten Vikeby, former Fiskeribladet journalist and former Norwegian consul in Murmansk, said.

Fiskeribladet ran a story on Semyon in 2008.

Some 16 years ago, Semyon the beluga whale was attacked by sea lions and had to be taken care of by humans. In 2008, he landed a "job" at a water sports centre in the White Sea in northern Russia, where he worked in therapy for children struggling with mental problems.

However, Vikeby subsequently argued that he was misquoted by Fiskeribladet. Thus, Semyon and Whaledimir are two different individuals.

"I only said that it's the same type of whale, which probably got the same training as therapy whales", Vikeby explained to the local newspaper Hammerfestingen.

While Semyon had a clear scar on his muzzle after being mauled by sea lions, Whaledimir is unscarred. However, he has stayed in Hammerfest harbour over the last few days and willingly seeks contact with people. The animal is unmistakeably tame and has amused Norwegian locals with his tricks. He even fetches things, such as balls.

Vikeby hopes that enthusiasts in the city can adopt the friendly whale.

"Isn't there anyone in Hammerfest who has guts to use the whale to create jobs? It is, after all, trained to a level that is already worth millions of dollars", Vikeby argued.

Regardless of the whale's identity, the Directorate of Fisheries is relieved that the animal is not a spy.

"We have been thinking of espionage and war, but in the end it is just a whale that wants us humans well. It is even used to cuddling with us. Absolutely fantastic", Inspector Jørgen Ree Wiig of the Directorate of Fisheries told national broadcaster NRK.

Previously, the whale received a lot of international attention, and the Norwegian Police Security Service (PST) has even examined the harness on the whale. The Institute of Marine Research and Norway's Arctic University in Tromsø (UiT) argued that the whale could have come from the Russian Navy, which, they claimed, had a tradition of experimenting on sea animals.

White whales, also known as beluga whales, are larger than dolphins but smaller than true whales and inhabit Arctic and sub-Arctic waters. For their intelligence and joyful disposition, belugas are often kept in captivity, where they are easily tamed and learn to perform different tricks.