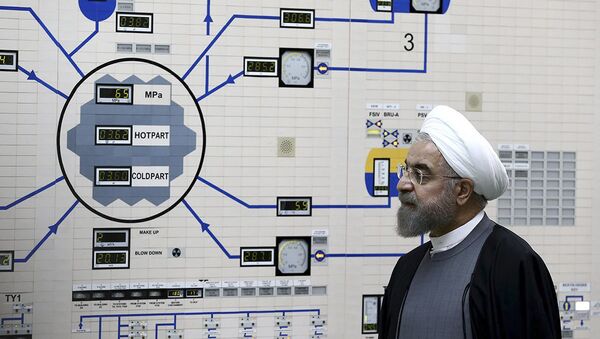 Following Washington's steps to curb Iranian energy exports, Tehran announced that it would cut back on some of its commitments under the nuclear deal - an accord that led to sanctions being lifted in 2015.

Tehran's announcement that it would backtrack on some of the "voluntary" commitments under the Joint Comprehensive Plan of Action (JCPOA), also known as the Iran nuclear deal, spurred global concern about the accord's future.

Moscow insists that Iran's decision to go back on some of its commitments under the nuclear deal were prompted by US moves against the country. Russia announced that it would be holding discussions with its European partners on ways to preserve the JCPOA from falling apart.

Furthermore, Moscow called on the EU to improve INSTEX, a mechanism aimed at bypassing US sanctions, to enable Iran to continue its oil trade. Russian Foreign Minister Sergei Lavrov noted that Iranian demands for INSTEX to facilitate its crude exports are "absolutely legitimate".

UN Secretary-General Antonio Guterres expressed hope that the Iran nuclear deal would be preserved following Tehran's announcement. He noted that the accord was a "major achievement in nuclear non-proliferation" that contributed to regional and international "peace and security".

German Foreign Minister Heiko Maas stated that Germany wishes to salvage the nuclear deal with Iran and wants to prevent the latter from shifting its nuclear programme in a military direction. He added that Berlin expresses "great concern" regarding Tehran's statements and remains in contact with the other signatories to the deal.

French Defence Minister Florence Parly echoed the German foreign minister's words, saying that the EU "absolutely [wants] to keep this agreement alive" in an interview with BFMTV, further adding that "nothing would be worse than Iran leaving this deal".

UK Minister of State for Asia and the Pacific Mark Field commented on Iran's decision, saying that it was "unwelcome" and calling on Tehran to stand by its commitments under the JCPOA, adding that the UK may otherwise consider re-imposing sanctions.

"The UK notes with great concern the statement made by Iran today concerning its commitments on the JCPOA […] We are in close contact with the other parties to the deal […] We urge Iran not to take further escalatory steps and to stand by its commitments", he said.

US Special Representative for Iran Brian Hook commented on the Islamic Republic's intention to roll back on some of its JCPOA commitments by stating that Washington would never be "held hostage to the Iranian nuclear blackmail". He also reiterated earlier statements by US officials that the White House would be imposing "maximum pressure" until Tehran abandons its current policies in the region.

The same day, Tim Morrison, special assistant to the president and senior director for weapons of mass destruction and biodefense, said that Iran should expect more sanctions "very soon".

Beijing echoed the Russian stance, pointing out that US actions against Iran had "further aggravated" the tensions around the nuclear accord. China called on all parties concerned to "exercise restraint" and avoid a further escalation in tensions.

"We will continue to fight those who would kill us", he said.

Iranian Foreign Minister Javad Zarif announced that Tehran would not be carrying out "some [of its] voluntary commitments" to the JCPOA, as the EU and other states had failed to resist pressure from the US, who pulled out of the accord last year and re-imposed sanctions on Iran. Zarif argued that Tehran's actions do not violate the nuclear deal and stressed that the country is not exiting the deal.

The Islamic Republic's decision was preceded by Washington ending temporary waivers to American sanctions on Iran's energy sector that were granted to some countries importing Iranian oil. Tehran's energy, banking, and shipping sectors fell under US sanctions in November 2018, following Washington's withdrawal from the nuclear deal one year ago, on 8 May 2018.