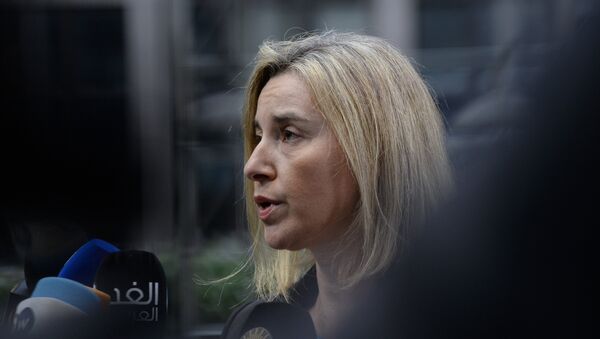 "We have discussed today the need and decision to intensify contact and coordination with the Lima Group, but also with CARICOM countries, with the US, with Russia, with China, with Cuba, with Mexico, with the Holy See, with others that can help create a conducive environment for the Venezuelans to engage in a democratic and peaceful outcome of this crisis", Mogherini said at the meeting of the ICG in the Costa Rican capital of San Jose.

“It (the ICG) also welcomes and accepts the invitation extended by the Lima Group to meet", Mogherini said, adding that the "the group members renewed their commitment to a political, peaceful, democratic and Venezuela-owned solution through free and fair presidential elections as soon as possible", Mogherini said.

US-Backed Guaido Claims 'Military Intervention' is Still on Table for Venezuela
Mogherini also stressed Tuesday that the ICG would continue its work to bring the country toward democratic elections through political negotiations. “The International Contact Group stresses that the best way forward lies in a credible negotiated political process with the objective of bringing the country to democratic elections. The International Contact Group will continue to support and facilitate efforts that can allow the country to move in this direction”, Mogherini said.

“The International Contact Group will set up a humanitarian working group in Caracas”, she added.

Moreover, the EU foreign policy chief warned all parties against any attempt to resolve the crisis in Venezuela through military action.

"We've been clear from the very beginning that we believe that there should be no military attempts either from within or from the outside of the country to solve the crisis through military means or through the means of force in whatever form", Mogherini said.

In conclusion, Mogherini said that the ICG would discuss in the next several hours the possibility of sending a political mission to Venezuela.

US to Increase Pressure on Venezuela, May Try to Kill Maduro – Ex-UN Rapporteur
The confrontation between the Venezuelan opposition, led by US-backed Juan Guaido, and the Maduro government resulted in a full-scale political crisis in the country in January, after the former illegally proclaimed himself interim president, contesting the results of last year's presidential election. Guaido was swiftly recognized by the United States and its allies, including those in Europe, while Russia and China among numerous other countries have backed the constitutionally-elected Maduro.

Since the first days of the crisis, Maduro has been reiterating his openness for talks. Caracas has, however, stated that it does not see the EU as an impartial ICG member, slamming it for making a presidential election a condition for dialogue.