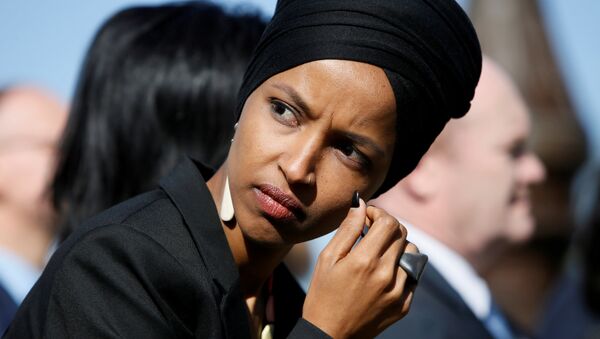 Muslim-American Congresswoman Ilhan Omar tweeted Sunday night that “the status quo of occupation and humanitarian crisis in Gaza is unsustainable".

Omar's controversial comments came on the heels of the latest violent escalation in the Gaza Strip on 4 May when hundreds of projectiles were fired toward Israel from the enclave, prompting the Israeli military to retaliate. The violence reportedly resulted in the deaths of at least 25 Palestinians and four Israelis.

How many more protesters must be shot, rockets must be fired, and little kids must be killed until the endless cycle of violence ends?

The status quo of occupation and humanitarian crisis in Gaza is unsustainable. Only real justice can bring about security and lasting peace.

Omar's tweet sparked the harsh criticism among prominent republicans, who have slammed the Congresswoman with allegations of anti-Semitism.

It’s deeply troubling that we’ve reached the point where no one is shocked when sitting members of congress, like @IlhanMN & @RashidaTlaib, side with Hamas terrorists over Israel. By remaining silent, democrat leadership & presidential candidates are endorsing this insanity. https://t.co/A8STX8WqLf

Senior adviser to US President Donald Trump's 2020 campaign Katrina Pierson drew ire on Twitter when she responded to Ilhan Omar's remark by attaching what netizens suggest is a 2015 video of the conflict in Ukraine’s Donbass to her post about the Hamas movement’s "violence" against Israel after the latest heavy exchange of fire in the region.

The latest criticism of Omar came after the congresswoman made another controversial comment in February, alleging that support for Israel in Congress was purchased by Jewish-backed advocacy groups.

On Monday, the Israeli Defense Forces (IDF) said that a total of 690 rockets were launched from Gaza over the past 48 hours, with 240 of them intercepted by air defence systems. Israeli forces have hit 350 targets in the Gaza Strip since Saturday. The exchange of fire has broken the Cairo-mediated truce, which lasted more than a month and stipulated reduction in bombardment in exchange for easing the enclave’s blockade by Israel.

Israel Responds to Multiple Rockets Fired From Gaza, Intercepts 'Dozens' (VIDEO)
Israel and Egypt imposed a blockade on the Gaza Strip in 2007, after the Hamas movement took control of the Palestinian coastal territory.

The Israeli-Palestinian conflict escalated in March 2018, when the Palestinians started mass protest campaigns called the Great March of Return at the Gaza border.