US Warns India Against Any Move to Impose Retaliatory Tariffs 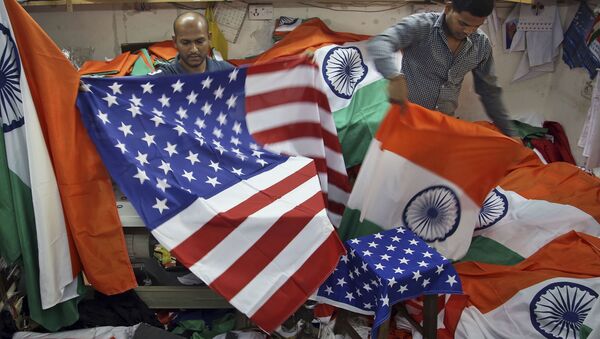 © AP Photo / Rajanish Kakade
Subscribe
International
India
Africa
Last year, India reduced the duty on completely built premium bikes from 75% to 50%. New Delhi and Washington have been engaged in a simmering trade conflict since the US trade representative's office notified the US Congress and New Delhi in March that Indian exports did not qualify for the Generalised System of Preferences (GSP).

Ross made the comments while on a visit to India. In March, US President Donald Trump had announced plans to end preferential trade treatment for India that allows duty-free entry for up to $5.6 billion worth of its exports to the US.

US-China Tensions Are a 'Threat' To World Economy - IMF Chief
The warning, conveyed through the visiting US commerce secretary to India on Tuesday, came days after President Donald Trump threatened fresh tariffs on Chinese goods as well.

Ross today met top Indian leaders, including Prime Minister Narendra Modi in New Delhi. Stating that India remains a challenging market for US firms due to higher tariffs, Ross, however, expressed the hope that the two strategically important partners can resolve the matter amicably.

"Today India is only the US' 13th largest market due to overtly restrictive market access barriers. The US is India's largest export market — that is a real imbalance", Ross said at the US government-sponsored business event "Indo-Pacific Trade Winds" on the second day of his India visit.

Calling it "unjustified", Ross said, "US businesses face significant market access barriers in India. These include both tariff and non-tariff barriers, as well as multiple practises and regulations that disadvantage foreign companies."

The statement came in the backdrop of US President Donald Trump's remark on Sunday, saying tariffs on $200 billion worth of Chinese goods would increase to 25% on Friday. It sent ripples in the Asian market. In addition, Trump threatened to impose 25% tariffs on an additional $325 billion of Chinese goods "shortly".  The announcement came in the midst of trade talks between the US and China.

"They charge us 100% tariffs on goods. So, they send a motorcycle — and they make a lot of them-Indian cycles. They send them to our country. We charge them nothing. We send a Harley Davidson to India and they charge us 100%. Not fair, okay. Not reciprocal. It's not fair", Trump said at the National Republican Congressional Committee's annual spring dinner in April.