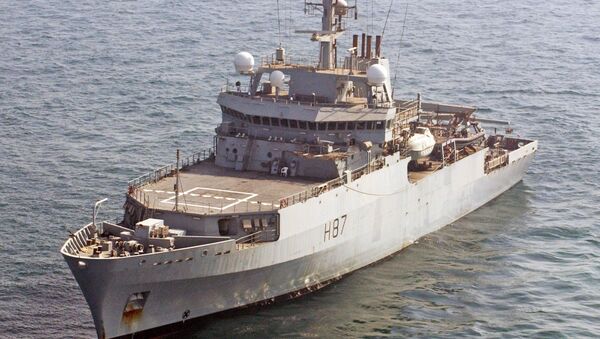 © Photo : Chris Wenham/MOD
Subscribe
The HMS Echo entered the Black Sea last month in order to participate in a freedom of navigation manoeuvre, according to the UK’s authorities. In April, NATO conducted training in the region despite Russian warnings that the alliance’s activities in the area heighten security risks there.

The British Royal Navy’s HMS Echo (H87) reconnaissance ship has arrived in Odessa on the Black Sea, the Ukrainian news agency Unian reports. The vessel will stay there for three days. Joint drills with the Ukrainian Navy are expected to take place in the Black Sea.

Before visiting Odessa, the ship reportedly sailed to the Romanian seaport of Constanța and the Georgian city Batumi on the Black Sea. HMS Echo, bound to leave the region on 10 May, entered the Black Sea on 20 April. According to the British authorities, the ship has been deployed to the region in order to participate in a freedom of navigation manoeuvre.

In April, NATO countries conducted military drills in the Black Sea. Russian Deputy Foreign Minister Alexander Grushko warned that increased NATO activities in the area heighten risks to security in the region, while the Russian Navy carried out its own exercise in response.

Notably, the HMS Echo reconnaissance ship is reported to have been the alliance’s first warship to arrive in the Black Sea in December 2018 in the wake of the Kerch Strait incident.

Russian President Vladimir Putin called the incident a provocation. Following the incident, martial law was announced in Ukraine and lasted for a month.