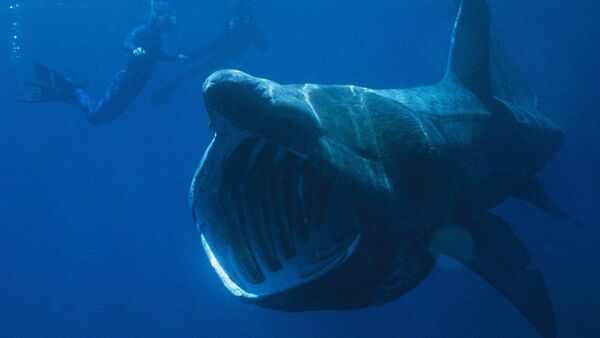 With a length of up to 33 feet and mass comparable to a four-passenger jet or bus, the basking shark (and its gaping abyss of a mouth) is one startling creature to look at, let alone swim with.

That did not stop Ryan Lawler, owner of Pacific Offshore Expeditions, from hopping in the Pacific Ocean to swim with the massive fish along the Channel Islands near southern California last month.

Listed as a species of concern in 2010 by the National Oceanic and Atmospheric Administration (NOAA), little research has been conducted concerning the fish. However, it is well-documented that basking sharks have a diet of fish eggs, plankton and krill and, compared to other sharks, have tiny teeth — making them virtually harmless to humans, according to Discovery.

"It was something we'd been dreaming about," Lawler told the Los Angeles Times, adding that his vessel's encounter was intentional and came about after hearing about their increased appearances.

"Many years ago, we saw a lot along the coast," Connally told the LA Times. "This is something new and different and we are all excited about it. The sightings we've had have been way over the top."

Sightings of the fish began to dwindle in the 1960s and all but disappeared from the California coast approximately 30 years ago, according to Heidi Dewar, NOAA research biologist. Though little is known about why the elusive fish disappeared, Dewar says a harvesting of basking shark fins and livers could be the culprit.

As for the recent sightings, NOAA ecologist Elliott Hazen believes they are related to a mass migration of both the basking shark and its food due to ocean warming.

Many researchers, however, hesitate to draw conclusions due to lack of research available on the basking shark and its normal migration patterns and behavior.

Ryan Freedman, another NOAA researcher, says the government organization will be trying to do more research this time around.

"A lot of times, we don't really know we need information until it's too late," Freedman told LA Times. However, he believes that modern technology and better protections for the animal under NOAA authority will allow for prolonged and in-depth study this time around.