Priyanka Chopra Mesmerizes as a Fairy at MET 2019 (VIDEOS & PHOTOS) 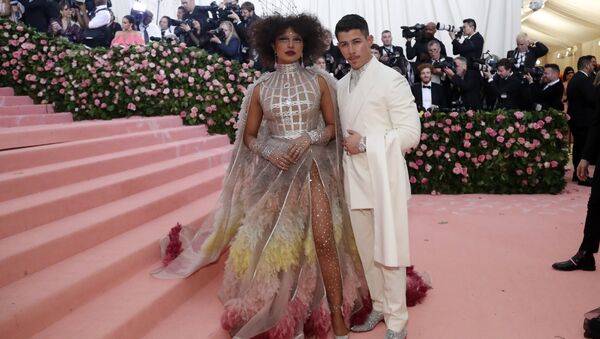 The global celebrity looked absolutely stunning as she took to the red carpet. Priyanka was as fluent as a flowing river while responding to questions and walking around in her gorgeous white dress alongside Nick Jonas who was also dressed in immaculate white.

New Delhi (Sputnik): Power woman Priyanka Chopra, along with her husband American songwriter and singer Nick Jonas, graced the MET 2019 Gala event dolled up as a fairy and went about enchanting the gala attendees with a smooth coy demeanour. They were extended the "happy anniversary" greeting as it was at the MET 2017 event that Priyanka and Nick Jonas met for the first time.

A post shared by Imperfect Perfections (@priyankachopra_globe) on May 6, 2019 at 9:09pm PDT

At the red carpet she was praised for her "bindi" — a dot donned on foreheads by Indian women.  "Thank you I love my bindi", Priyanka said.

"I mean I always try and find something which defines who I am which is an amalgamation of the East and the West. This year that's my bindi", explained Priyanka.

She was then asked, "Would you say that this is your most extravagant moment or was it the wedding?" To this she smoothly quipped, "Oh well, I did have a 75 foot train then (during the wedding)".

As the theme of this year's MET Gala was "camp", the hubby-wifey duo were asked, "What's on your camp playlist? Was it ‘Sucker'… was that on the playlist?"

"Of course", said Nick. Sucker was the Jonas Brothers first single released earlier this year after they re-banded together after a four-year split.

The "camp" theme pertained to "over the top" and "out of this world" fashion,

The hostess finished off with happy anniversary wishes. "Yes, Happy Anniversary technically", she cheered them on.

​Their arrival at the event venue was greeted with wild cheers.

A post shared by Imperfect Perfections (@priyankachopra_globe) on May 6, 2019 at 4:54pm PDT

Their red carpet walk together hand-in-hand was a delightful sight to behold.

A post shared by Imperfect Perfections (@priyankachopra_globe) on May 6, 2019 at 5:33pm PDT

The fantastic couple were seen pecking at each other on the red carpet.

A post shared by Imperfect Perfections (@priyankachopra_globe) on May 6, 2019 at 5:58pm PDT

Priyanka posed for the camera with her own version of a "fairy close-up".

A post shared by Imperfect Perfections (@priyankachopra_globe) on May 6, 2019 at 4:55pm PDT