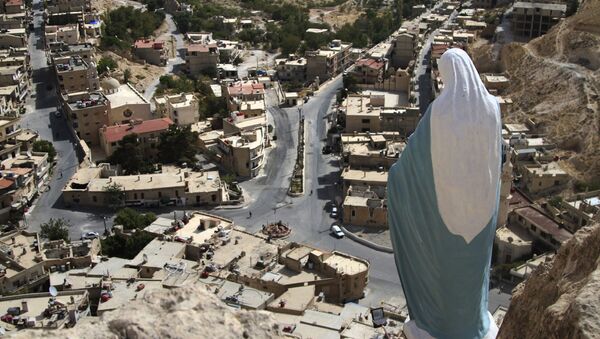 A similar incident occurred seven years ago, when a man in his 50s attempted to deface a Byzantine icon by throwing black paint at it.

Police detained a 51-year-old woman, Elzbieta Podlesna, over profaning Poland’s famed and revered Catholic icon, the Madonna of Częstochowa, after she painted an LGBT-rainbow halo around her and baby Jesus’ head in a set of posters. The woman was later released, local media reported.

“Telling stories about freedom and ‘tolerance’ doesn’t give anyone the right to offend the feelings of believers”, Joachim Brudziński, Poland’s interior minister, commented on the case, billing the artist’s posters as “cultural barbarism”.

According to the Polish penal code, offending others’ religious sentiments is a punishable crime, with authorities treating the incident as a “profanation” of a revered religious image.

The image, called the “Black Madonna of Częstochowa”, dates back to the Byzantine epoch and is much venerated across the West Slavic country. It is kept in the monastery of Jasna Góra, a UN world heritage site and Poland’s most prominent Catholic shrine.

Police have already dealt with a similar incident earlier: in 2012, monastery guards had to interfere as a 58-year-old man tried to deface the painting by throwing vials of black paint at it. Fortunately, no damage was done to the image, which was covered by a protective pane of glass.

Separately, recent media reports covered a culture-related controversy in Poland as the country’s authorities issued a ban on a video from the Warsaw National Gallery that depicted a woman eating a banana.  Despite it being part of the permanent exhibition for many years, the museum’s head made a decision to remove it, reportedly not without pressure from the Polish Ministry of Culture.