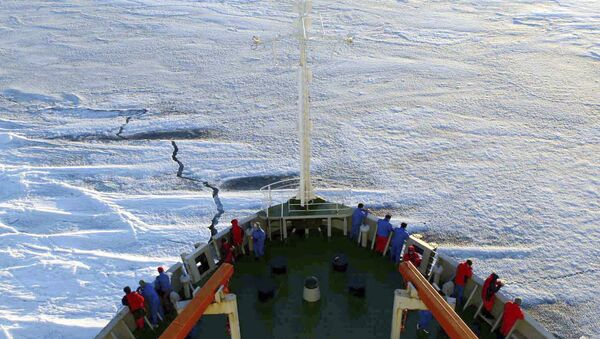 © AP Photo / Zhang Zongtang/Xinhua News Agency
Subscribe
Speaking ahead of the Arctic Council meeting the other day, Mike Pompeo argued that China’s “pattern of aggressive behaviour elsewhere will inform” about the way it treats the Arctic, which abounds in a variety of natural resources. His remarks prompted a harsh backlash from high-ranking Chinese officials.

Chinese Foreign Ministry spokesman Geng Shuang has struck back at the US calling out Beijing’s Arctic interests, asserting that Secretary of State Mike Pompeo had misrepresented facts about the East Asian country’s intentions in the resource-rich region due to “ulterior motives”.

"We have no geopolitical calculations, and seek no exclusionary blocs", he said, underscoring that China has participated in Arctic affairs with “an open, cooperative and win-win attitude”. He asserted that although China will “not intervene” in matters between Arctic countries, it won’t abstain from resolving global issues relating to the Arctic either.

"The Arctic issue is not only related to Arctic countries, but is also of global significance and international influence", Geng said, adding that China is willing to join efforts with others to “protect the Arctic, to exploit the Arctic and to participate in the governance of the Arctic”.

On the eve of the eight-member Arctic Council’s meeting in Finland on Monday, Pompeo announced US plans to double down on its presence in the Arctic in in order to counter Russia and China and put the screws on what he called the countries’ “aggressive behaviour”.

“Just because the Arctic is a place of wilderness does not mean it should become a place of lawlessness”, he said.

The top US diplomat warned of scenarios where countries become entangled in debt and corruption, warning of low-quality investments and uncontrolled exploitation of natural resources, referring to the aforementioned as potential effects of China gaining a firm foothold in the promising region.

China, which injected an eye-watering $90 billion investment between 2012 and 2017, according to Pompeo, in the icy region, holds an observer status in the Arctic Council’s cooperation body, unlike the US and Russia, which are currently members of the council. Washington has repeatedly voiced concerns over Beijing attempting to position itself as a “near Arctic state”.

The latter is registered in black-and-white in China’s Arctic Police document of 2018, whereby it vowed to actively partake in Arctic affairs and act as a major stakeholder in the region.

000000
Popular comments
The Usa politicien behave like clown's witch have lost there brains and don't no in witch way there have to go there are lost and in panic !!!