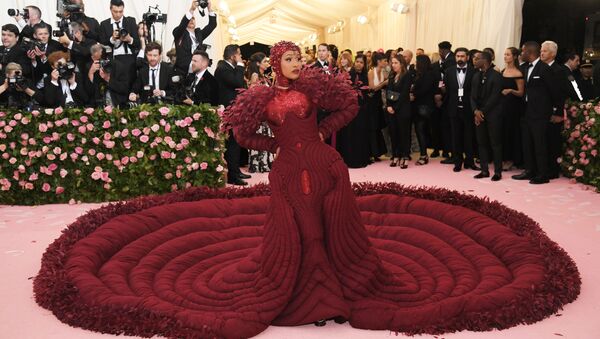 Explaining her choice of the haute-couture outfit, the Bodak Yellow rapper stressed that the primary aim of her eye-popping raiment was to draw attention to camp, the culture of “being yourself, being extravagant”, no matter how others judge it.

Famed hip-hop singer Cardi B has opted for a highly unusual outfit to appear on the Met Gala pink carpet in, as she wore what she referred to as “the vajayjay” – a fur-trimmed luxe gown designed by Thom Browne, inspired by “feminism” and a “woman’s body”.

In her comments to YouTuber Liza Koshy, the rapper explained the idea behind the dress, as well as took the public through its extravagant design, pointing out “the little boobies” that were tipped with ruby “nipples” by Stefere jewellers, which as Cardi detailed, cost an eye-popping $250,000 (£191,298) each.

She especially dwelled on her dress featuring a “vajayjay”, “and if you see my back, it’s like, booty”, Cardi B noted.

“If I lose one of them, you know what I’m saying, I’mma have to sell my Birkin bags”, she cheekily remarked before making her trademark laugh.

The star also specified the theme of the night – Camp – going on to explain how she understands the term now popular in the LGBT community:

“Camp is being yourself, being extravagant”, she told Liza, adding “you don’t care if nobody judge you or not, it’s you”.

Comments on the rapper’s flamboyant looks and style immediately flooded the Internet, with many being unable to resist the temptation to liken her scarlet gown to blood and a woman’s bodily characteristics:

“Cardi B is a walking menstruation”, one posted in Russian, gaining support from a number of others:

cardi b dressed up as that time of the month pic.twitter.com/fk4zp9qCTJ

One, meanwhile, suggested that the dress looked like lava:

How did I miss Cardi B earlier?!?! She's lava. pic.twitter.com/CkCFddsLCJ

…whereas another covertly took a swipe at her over the super-costly “nipple covers” that the singer wore to the landmark event:

Let's just say one of Cardi B's nipple covers she wore to the #MetGala could pay our rent for the next 20 years. https://t.co/aTZZo92Jc3 pic.twitter.com/ulqWadi7tI

Whatever the case, hearty lulz prevailed — with some even launching a vote for whose “A” train dress is the most eye-popping:

Who killed the Train Dress.
RT for Cardi B
Like for Nicki Minaj pic.twitter.com/xnjUFpZiuQ

y'all jus sleeping on cardi b

The last time the rapper attended a red carpet event was at the Billboard Music Awards, where she caused no less controversy by apparently flashing her actual “vajayjay” while posing with her husband, Offset.

However, at the time, she flatly denied showing her vagina to the paparazzi and took to Instagram to describe at length the difference between various female body parts:

“First of all, that ain’t my pussy. My pussy right here. This right here is where I birthed my daughter from. This right here the part when I go like this, that’s just my ass. You know when you got the fat ass […]”, she wrote.