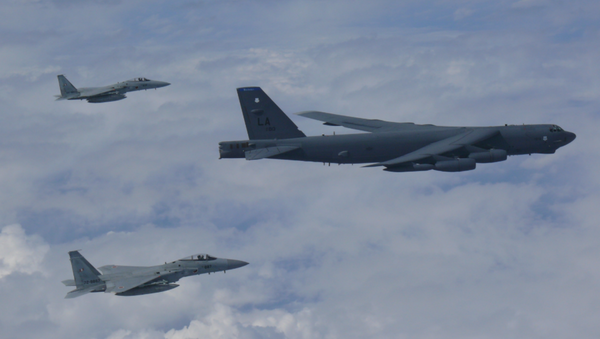 On Sunday national Security Adviser John Bolton announced that the USS Abraham Lincoln Carrier Strike Group and a bomber task force have been deployed to the Middle East as the Trump administration sees "clear indications" of threats from Iran to US forces in the region.

The US military said Tuesday that B-52 bombers will join additional forces being sent to the US Central Command region, according to Reuters report.

The announcement was made by Navy Captain Bill Urban, a spokesman for US Central Command, who said Marine Gen. Kenneth McKenzie, the chief of US Central Command, requested additional forces in the Middle East "to protect US forces and interests in the region and to deter any aggression" after receiving information about a credible threat, The Washington Post report says.

"We continue to closely monitor the activities of the regime in Iran, their military, the [Islamic Revolutionary Guard Corps], and their proxies, and we are well postured to defend U.S. forces and interests," Bill Urban said as cited by The Hill.

Four B-52 Stratofortress strategic bombers are expected to be deployed to the Middle East in response to what US Acting Secretary of Defence Patrick Shanahan dubbed "indications of a credible threat by Iranian regime forces."

Two of the nuclear-capable bombers are slated to leave Tuesday from Barksdale Air Force Base in Louisiana, arriving at Al Udeid Air Base in Qatar on Wednesday, a CBS News report says.

The deployment of the Lincoln strike group and the B-52s "are considered prudent steps to protect US forces and interests in the region and to deter any aggression," said Urban.

US Aircraft Carrier Strike Group Deployment Near Iran is a Bluff – Analysts
He confirmed Lincoln's deployment was previously "expected to include a significant amount of time" in Central Command, adding that the deployment to the area is now "expected ahead of its original schedule and is in response to credible threats in the CENTCOM region," according to The Hill report.

He, however, did not provide any specific information regarding the alleged Iranian threat.

"We are not going to be able to provide detailed information on specific threats at this time," Urban said as cited by The Hill.

The deployment of additional forces comes amid growing tensions between Washington and Tehran, and the former's efforts to intensify pressure against Iran, following the 2018 US withdrawal from the Joint Comprehensive Plan of Actions (JCPOA).