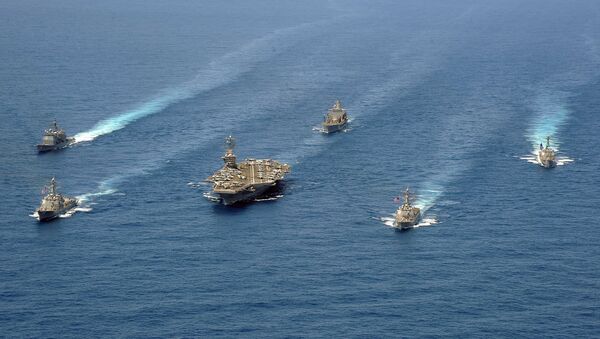 © Wikipedia / US Navy
Subscribe
International
India
Africa
MOSCOW (Sputnik) - The United States’ recent decision to deploy its aircraft carrier strike group near Iran is a form of military bluff that is unlikely to result in a direct military confrontation between the two countries, experts told Sputnik on Monday.

US National Security Adviser John Bolton said on Sunday that the United States was deploying the USS Abraham Lincoln Carrier Strike Group and a bomber task force near Iran, to the US Central Command (CENTCOM) region, as "a clear and unmistakable message to the Iranian regime that any attack on United States interests or on those of our allies will be met with unrelenting force".

The US national security adviser also stressed that Washington was not "seeking war" with Iran, but it was fully prepared "to respond to any attack, whether by proxy, the Islamic Revolutionary Guard Corps, or regular Iranian forces".

The move comes on the heels of growing tensions between Tehran and Washington, sparked by the US decision to reimpose sanctions on Iran and make all countries end their Iranian oil imports in a bid to strike a blow against the Islamic republic's economy.

US Plans to Announce New Set of Sanctions Against Iran – Reports
In addition, the United States has officially designated Iran’s Islamic Revolution Guard Corps (IRGC), a branch of the Iranian Armed Forces, as a terrorist group. In response, Tehran has placed the CENTCOM under the same designation.

Iranian Foreign Minister Mohammad Javad Zarif said in late April that members of the administration of US President Donald Trump, particularly, Bolton, as well as some of Washington's allies — Israel, Saudi Arabia and the United Arab Emirates — were dragging Washington in a conflict with Tehran.

US Decision Nothing But a Military Gesture

Dr. Alam Saleh, a lecturer in Middle East Politics at Lancaster University, told Sputnik that by its decision to send aircraft carrier to the Middle East, the United States was sending "a wrong message" to Iran, adding that the US task force was an easy target for the Iranian forces.

Sergei Demidenko, an associate professor at the Institute of Social Sciences of the Russian Academy of National Economy and Public Administration, in turn, opined in his comments to Sputnik that the deployment of US carrier strike group was just a part of the "political ritual".

"There are no serious reasons to be concerned. Such things have been undertaken more than once by both parties, this is some part of a political ritual — Iran declares that it will block the Strait of Hormuz, the United States begins to threaten with military force", Demidenko said.

Iran's Revolutionary Guard Navy Threatens to Close Hormuz Strait - Reports
Demidenko also ruled out the possibility of a direct confrontation between Iran and the United States.

"They threaten each other, aircraft carriers are being deployed in order to consolidate a certain political status quo, things will not go any further, this episode must be viewed in the context of a general escalation of tensions in the US-Iranian relations, there will be more than enough aggressive and less aggressive gestures of this kind in the near future", Demidenko said.

However, the deployment of the US carrier strike group is unlikely an indication of Washington preparing for a military intervention in Iran as the latter can put in question the US chances to win, according to Saleh.

"There is no military option for America, it would be wrong for several reasons. One of them is that the United States cannot and has no mode or legitimacy to enter a long war in the Middle East again… in the aftermath of 2003 [US invasion of Iraq]. And what Iran can do in terms of a military strategy is to prolong the length of the war and, therefore, it would be really difficult for the United States to enter such a war. They can start, but it would be Iran to decide when to finish it", Saleh underlined.

Thus, the US decision could be viewed as an attempt "to put Iranian decision makers under more psychological pressure", Saleh noted.

Peaceful solution to the crisis between Iran and the United States is hampered by both countries designating their military branches as terrorist organizations, Saleh believed.

World
Iran: US Presses UN Members to Breach Resolution Endorsing JCPOA Or Be Punished
"[As Washington] designated the Iranian Revolutionary Guards as terrorist organization, I think that all diplomatic ways and methods are now closed between the United States and Iran. You can never negotiate with terrorists. This is actually a mutual problem at the moment, the Iranians also considering the US military bases in the region as terrorist. This would absolutely somehow make it impossible to have some kind of diplomatic solution for the problematic position in the region", Saleh stated.

The European Union, as a party to the Iran nuclear deal, might be the only international actor that can de-escalate tensions between Iran and the United States, but it might be too late in the context of enormous US pressure on the Middle Eastern nation, the expert noted.

"The only international actors, who could somehow influence and probably make some changes — convince the Iranians to behave based on the nuclear agreement — are the Europeans and no one else. But Europe, I think, is too weak to be able to make Iranians happy at the time when the United States so publicly confronts Iran in many different ways: economically, militarily, politically and so on", Saleh said.

Tehran is reportedly expected to announce countermeasures in response to the US hostile polices, withdrawal from the Iran nuclear deal and sanctions reimposition on Wednesday.

The countermeasures may include Iran partially or completely reneging on its commitments under the nuclear deal and resuming some of its nuclear activities. Tehran is not, however, considering the possibility of withdrawing from the nuclear agreement, according to the Iranian Students' News Agency (ISNA).