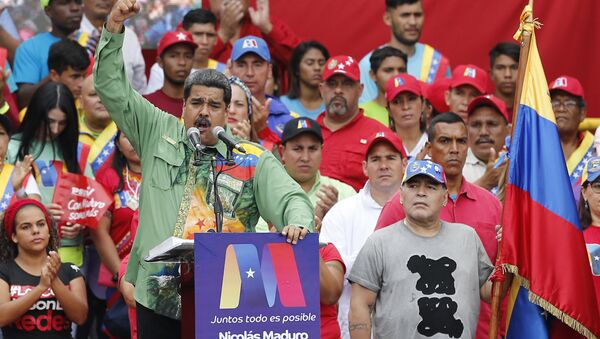 © AP Photo / Ariana Cubillos
Subscribe
US Secretary of State Mike Pompeo in an interview with Fox News on Sunday said that “every country must get out” of Venezuela “including the Russians”. Pompeo’s statement comes ahead of a meeting with Russian counterpart Sergei Lavrov, who has accused the US of being behind an “unprecedented campaign” to oust the legitimate government of Venezuela.

Sputnik has discussed the crisis in Venezuela with Julia Buxton, Professor of Comparative politics at the Central European University.

Sputnik: According to CNN, the Trump administration wants to find a way to financially support Venezuelan opposition leader and self-proclaimed interim president Juan Guaido with an "influx of cash". How justified is the US support for Guaido and the opposition?

Venezuela Vows Response if US Takes Military Action
Julia Buxton: I think it's important to point out that the US has already been sending substantial amounts of money to the Venezuelan opposition movement for at least two decades. This has been mainly through the umbrella of the so-called Democracy Promotion Assistance. It's been a considerable amount of money, it's funded a lot of opposition activities over the years, and it has been a real problem and wholly counterproductive for the position, because what the opposition needs to do is reconnect with the majority of the Venezuelan people.

Even though it seems like they have a lot of people out in the streets in support for the opposition, the reality is that in an election process I think Guaido would probably face quite a potentially serious challenge from another chavista if Maduro is barred from running. So US funding really just helps the opposition to circumvent the more problematic, and long-term and really quite democratic task of reconnecting to Venezuelan voters and understanding what the Venezuelan voters want.

And US cash also helps the opposition to paper over very deep divisions. So the reality is that ultimately it may seem like it short-term fix but it's really not going to help the opposition in the longer-term, it makes them look like puppets of the US government, and it's never really, in my view, been justified, the US has been supporting the opposition since even 1999, all the way back to when Chavez was first elected, it's not helped them, it makes them look like stooges of America, and I think ultimately, at the end of the day, the opposition just needs to re-define themselves as a domestic political proposition.

Guaido Has No Political or Socially Holistic Project for Venezuela - Analyst
Julia Buxton: I think Mexico and Germany and many other countries are quite right in being deeply concerned about the impact and consequences of any type of US military intervention. I think right now there is concern, there is a worry, there is the threat that the US might engage in some form of military strike or military action. I wouldn't rule it out; it's a very unpredictable US government right now. But there's a couple of things that make me optimistic that there won't be any form of US military intervention.

First of all, Trump has been reluctant to commit US forces overseas. As you're probably aware he's tried to pull the US out of Syria; also any form of military intervention will not play well with some within Trump's political constituency, his domestic supporters, who really don't want to see US troops committed overseas. Such a move would face a huge backlash from a number of politicians and the public in Latin America. I think the other thing also is that if the US did intervene militarily it would not be a quick operation.

The US risks triggering a civil war that could spill over into neighbouring Colombia, and it also means that the US would have to bear the cost of reconstruction in Venezuela were they to intervene militarily. So I think if Trump is weighing up the costs of intervening and the benefits, the costs for him right now are very, very high, and I think that's why the US is really trying to erode Maduro through more types of psychological operations rather than big troop commitments. From what we hear, the US military do not really want to be engaged overseas in this campaign in Venezuela, and Trump could also face opposition from within the US Congress. He might need congressional approval, and I think that he would really struggle to get that.

Sputnik: In a campaign video for the 2020 elections democratic candidate Tulsi Gabbard slammed Washington's war rhetoric particularly towards Venezuela. How much support is really there inside the US political landscape for involvement in the Venezuela crisis?

Russian, Venezuelan Foreign Ministers Discuss Coup Attempt in Venezuela (VIDEO)
Julia Buxton: I think there is a strong bipartisan consensus against Maduro across Democrat and Republican parties in the US. Obviously, we have independents such as the Green Party which don't support such US positioning. The reality is that we have presidential elections coming up in the US in 2020; places like Florida are a big constituency for Trump that he needs to win. He would probably do that if he's seen to respond to pressure from the Venezuela and Cuba lobby in Florida. It also looks good for a president to be involved in strong overseas or bellicose actions.

This could play well building up to an election process, but I think that while we do have a bipartisan consensus, Barack Obama introduced the sanctions on Venezuela, it wasn't a Republican president, it was the Bill Clinton administration that initially refused to give a visa to Chavez right back in 1998 when he was just still a presidential candidate. So in the top ranks of the Democrats and the Republicans we do see this bipartisan consensus, but we are seeing that beginning to break now.

Particularly, we're seeing Democrats, as you highlight in your question, who really don't want any form of military engagement in Venezuela, and who're also becoming concerned at the increasing aggression of statements from people like John Bolton and Secretary of State Mike Pompeo. So I think now with the latest, the third defeat as it were for Guaido in his efforts to remove Maduro, there are voices in the Democrats and also some Republican voices who are saying that maybe a different strategy is required.

Sputnik: While the coup appears to have been thwarted by Caracas, what does Guaido have to offer to the Venezuelan people apart from his pledge to topple Maduro?

Julia Buxton: Guaido is really focused on a big metanarrative of democratisation, of an end to corruption, of an end to human rights abuses and security sector abuse in Venezuela. So his whole message is very about real political transformation in the country. The reality is that I think Guaido is going to have a real problem, any opposition leader, if they come to power is going have a real problem because fundamentally they're oriented to the view that Venezuela has to move back to neoliberal market-led reforms in order to get its economy back on its feet.

Pompeo Claims Any US Action in Venezuela, Including Military, to Be 'Lawful'
And the problem with that is it will face intense resistance I expect from the people who work in the nationalised industries, from the people who benefited from the land redistribution programmes. It is going to be very, very hard in Venezuela to impose the type of market reforms that Guaido is clearly offering, and is evidenced through his appointment, for example, of Ricardo Hausmann as the Venezuelan representative at the Inter-American Development Bank.

So Guaido is in essence offering transformative change for Venezuela, but the reality is, I very much doubt he has the capacity to deliver very much, given the institutional constraints, the depths of the types of problems which will be inherited, and fundamentally, because of his lack of real cross-party cross-national support for the direction that he wants to take the country in, which is back to traditional market-led solutions and back into the US sphere of influence.