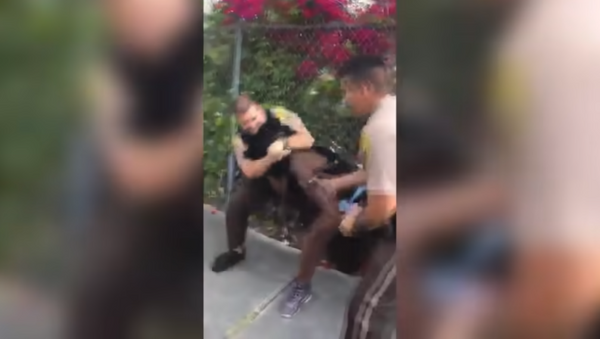 © Screenshot/The Battousai
Subscribe
International
India
Africa
A Florida police officer has been charged with misconduct and battery after he violently arrested a woman who’d called 911 to report threatening behaviour by her neighbor.

Dyma Loving, 26, and her friend, Adrianna Green, called 911 on March 5 after a neighbor hurled insults and pulled a shotgun on the pair, threatening to fire the weapon as they walked past the neighbor's home on the sidewalk.

Several officers from Florida's Miami-Dade Police Department responded to the scene after the 911 call. However, it was between Officer Alejandro Giraldo and Loving that things grew tense, as the officer struggled to comprehend the timeline of events.

​At one point in the video, Loving and Green both explain to Giraldo that there are various security cameras that police can review to get a better understanding of what occured. Giraldo responds to Loving by instructing her to "chill out."

Loving lowered her tone, stating that she was calm. As another officer approached the scene, Loving explained that she needed to return to her home to charge her phone because her child was sick.

"I don't have time for this," Loving says of the officers' questions. "I'm freaking out. I just got a gun pointed at my face, my daughter is sick, I need to… I just want to go home and charge my phone."

Although Loving's remarks were made to the female officer who approached the scene, Giraldo intervened, pushing Loving against a wire fence and onto the ground before placing her in handcuffs. Throughout the scuffle, Loving repeatedly yelled, "Do not touch me."

"I just said I wanted to call my kids. My phone is dead," she says. "What do you not understand. I got a gun pointed in front of me… I'm stressed out. I need to go and call my children."

Footage captured by Green offers a different view of the altercation and shows Giraldo putting Loving into a headlock after he appears to have some technical issues with the handcuffs.
Loving is later yanked up by Giraldo as she is taken to a patrol car. "Why does he have to handle her like that? She didn't do anything wrong," Green tells an officer off camera. "[Loving] wasn't being disorderly."

According to local media outlets, Giraldo wrote in his police report that he arrested Loving because she "would not obey commands," was "uncooperative" and because she was "screaming at us, causing a scene in a residential neighborhood."

Loving was arrested for disorderly conduct and resisting an officer. However, those charges were later dropped, local news station WPLG reported. She is now pursuing a civil lawsuit against Giraldo.

The Miami-Dade State Attorney's Office revealed on Friday that it had charged Giraldo with one count of official misconduct and one count of battery. "After taking the sworn statements of Ms. Dyma Loving, Ms. Adrianna Green, all the other available witnesses, and reviewing all he known video evidence, we believe there is sufficient evidence to charge a violation of Florida's criminal statutes," reads a statement.

Giraldo was subsequently arrested. He was released from custody after posting bond.

‘You Told Me To': US Cop Kills Man as He Complies With Demands to Disarm (VIDEO)
Justin Moore, Loving's attorney, said in a release that his client applauded the charges brought against Giraldo. He also noted that other officers involved in the arrest should face charges, saying, "It is more than reasonable that they meet the same scrutiny that Officer Giraldo has received."

Giraldo is expected to appear in court again some time within the next 21 days.

As for the neighbor who pulled the shotgun on Loving and Green, he wasn't taken into custody until March 14, according to the the Miami Times, which identified him as Frank Tumm. The shotgun-toting neighbor was charged with two counts of felony aggravated assault with a deadly weapon.