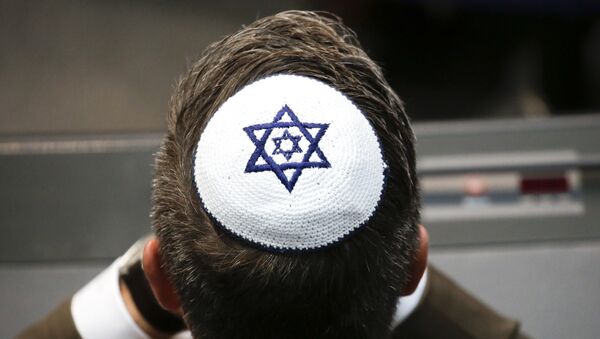 While senior party members rushed to apologise, the local chair of a youth branch of Sweden's ruling Social Democrats Party has defended the anti-Zionist song chanted by its members during a Labour Day march.

SSU, the youth wing of the Social Democrats, has landed in hot water over chanting "Long live Palestine, crush Zionism" during its recent march, in which even high-ranking Social Democrats, such as party veteran and former Malmö municipal board chairman Ilmar Reepalu took part.

The anti-Israeli chant by Sweden's ruling party was strongly condemned by Svante Weyler, the chair of the Swedish Committee Against Anti-Semitism, and followed by a number of politicians.

"It is hard to believe that it means anything other than wishing to wipe out the state of Israel. And the idea of wiping out Israel is an anti-Semitic thought. There is a long tradition of concealing anti-Semitism behind the concept of anti-Zionism", Weyler explained to national broadcaster SVT.

The Christian Democrats' policy director Johan Ingerö suggested that the slogan was anti-Semitic.

"It means that you intend to crush the only Jewish state in the world, the only country where Jews can feel secure", Ingerö explained to the news outlet Nyheter Idag.

Ingerö also accused Social Democrats of hypocrisy, suggesting that they smear their right-of-centre opponents as "far right extremists" at the same time while flirting with sentiments that pose a direct threat to Swedish Jews, who, he argued, already feel insecure.

"I understand and take seriously all the criticism against our local unit in Malmö", Botström wrote on Twitter. "There should be no doubt over where SSU stands on this question. We distance ourselves from all forms of anti-Semitism", he added, assuring that the song won't be sung in the future.

"You can't just take anti-Zionism and anti-Semitism and stick an equality sign between them", Ververidis told SVT.

Furthermore, she argued that the chant had a long history within the labour movement.

"It is about taking a political stance against the occupation of Palestine, and not about being against Israel or the Jewish people", Ververidis explained.

She also contested Botström's assurance that the song will no longer be chanted during demonstration. According to Ververidis, SSU Malmö is yet to discuss its appropriateness for future events.

Ververidis slammed Botström's hasty condemnation, accusing him of "mixing up apples and pears".

"This chant has been sung for ages and is about criticism of Israel's occupation policies and nothing else. This is something Botström himself knows very well", she concluded.

"Long live Palestine", from where the "crush Zionism" chant originates, is a song by Palestinian-Swedish rock group Kofia from the 1970s.

Last year, SSU landed in trouble over anti-Semitic and homophobic statements by Islamic members of its group in Skåne County, who later left their posts.

Under Social Democrat governance, Sweden became the first EU nation to recognise Palestinian statehood in 2014, which caused a diplomatic backlash from Israel and a dramatic souring of Swedish-Israeli relations.