Pakistan Encouraged to Use Yuan Amid China's De-Dollarisation Trend 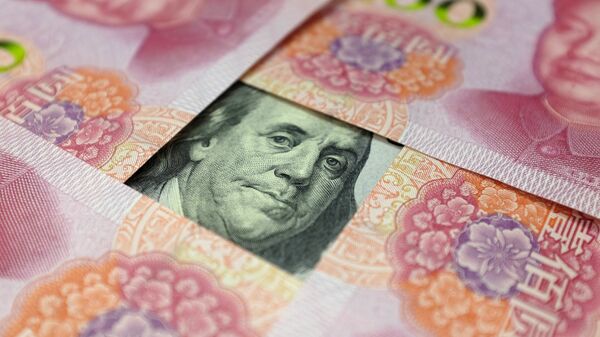 © REUTERS / Jason Lee
Subscribe
International
India
Africa
It was last November that Pakistan and China agreed to walk away from the US dollar in bilateral trade and start using the yuan in transactions instead.

As China’s Belt and Road Initiative (BRI) has boosted the global use of the yuan, Pakistan, which is a part of the project, has been increasingly encouraged to use the Chinese currency in its business dealings with Beijing instead of doing trade in the US dollar, the Global Times reported.

Despite the yuan skyrocketing in popularity in Southeast Asia, relatively stringent foreign exchange policies in some BRI markets are restricting the currency’s internationalization in the short term.

“On the positive side, the growing pace of yuan use in BRI countries has been faster than the yuan’s overall usage in the world in recent years. The trend is particularly evident in some Southeast Asian countries like Singapore”, Zhou Yu, director of the Research Centre for International Finance at the Shanghai Academy of Social Sciences, was cited as saying.

Pakistan and China agreed to ditch the greenback and start trading in yuan in bilateral relations in November 2018.

"The agreement is part of practical steps being taken [by China] to support our [foreign] currency [reserves]”, Pakistani Information Minister Fawad Chaudhry said at the time.

The central State Bank of Pakistan immediately declared the yuan an approved foreign exchange for all purposes in the country.
China has increasingly been using the yuan, which was included in the Special Drawing Right (SDR) basket in 2016 alongside the US dollar, the Japanese yen, the euro, and the British pound, in bilateral trade with a number of countries, including Russia.

Asia
Pakistan Seeks Closer Economic Ties With China Despite Concerns in US
In addition, Beijing has been on a gold-buying spree for several months now as part of the country’s strategy to move away from the US dollar.

China’s decision to boost its gold reserves after a two-year hiatus coincided with similar efforts by world central banks to shift away from the greenback.

According to the People’s Bank of China, it increased its reserves by 10 tonnes in February, following the acquisition of 11.8 tonnes in January and 9.95 tonnes in December, thus bringing overall holdings to 1,874 tonnes, or 60.26 million ounces. In January, China had the sixth largest gold reserves in the world, slightly lagging behind Russia.