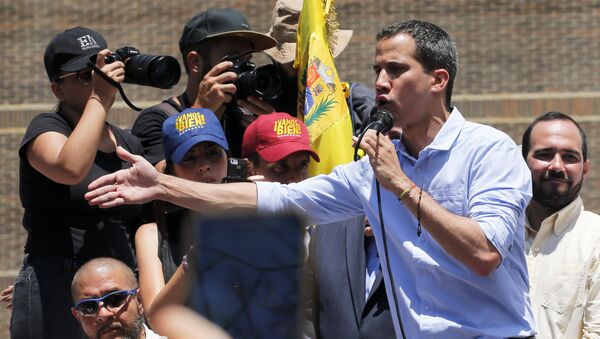 © AP Photo / Fernando Llano
Subscribe
The Venezuelan opposition leader, who proclaimed himself interim president and called on legitimate head of the country Nicolas Maduro to step down, attempted a coup on Tuesday that ended in failure. Meanwhile, US officials have made it clear that all options are “on the table”.

In an interview with the BBC, self-proclaimed Venezuelan leader Juan Guaido stated that it is “responsible to evaluate” the possibility of international intervention when he was asked if he would welcome US military intervention.

"I, as the president in charge of the national parliament, will evaluate all options if necessary”, he told the British broadcaster.

He also welcomed US support, branding it “decisive”.

"I think President [Donald] Trump's position is very firm, which we appreciate, as does the entire world”, he said.

Speaking to ABC, Secretary of State Mike Pompeo recently stated that Donald Trump "has his full range of Article 2 authorities", when asked if the US president believes he could intervene militarily in Venezuela without congressional approval. While emphasising that the US still has a "full-scale set of options", Pompeo added that he is fully confident that "any action" the US takes in Venezuela would be "lawful".

For his part, Trump, who called Russian President Vladimir Putin on the phone to discuss the Venezuelan crisis, said that he "feels the same way" with Putin about the "need for positive developments in Venezuela”. His statement appeared to contradict his own senior officials' strong rhetoric concerning Russia's "involvement" in the Latin American nation in the wake of the arrival of Russian military experts in the country earlier this spring.

Despite his coup attempt last week failing, Guaido has claimed that it is "clearly visible that the armed forces no longer support Maduro".

"I think the only one who really hurts himself is Maduro. He has been losing again and again. He is increasingly weak, increasingly alone, and has no international support. On the contrary, we gain acceptance, support and future options”, the self-proclaimed interim leader claimed.

After his failed attempt to overthrown Maduro, Guaido welcomed the discussions of military options in the US, calling them “great news”, as he spoke to The Washington Post.

“That’s great news to Venezuela because we are evaluating all options. It’s good to know that important allies like the US are also evaluating the option. That gives us the possibility that if we need cooperation, we know we can get it”, he told the US outlet.

The situation in Venezuela has been intense since January when Guaido illegally proclaimed himself the interim president escalated last Tuesday. Guaido announced the start of the "final phase" of the opposition's campaign to topple the government and called on the military to support him. The coup attempt resulted in violent rallies on 30 April and 1 May. It failed and left at least 300 people injured, according to a local human rights group.

READ MORE: Trump ‘Asking Questions on Reliability’ of US Intel on Venezuela – Report

Guaido, who has been backed by the US and its allies since January, later conceded that the opposition had miscalculated its support within the military. The country’s armed forces sided with Nicolas Maduro, who, in turn, has the support of multiple countries including Russia and China, as the only legitimate president of Venezuela. Maduro later praised the country’s National Bolivarian Armed Forces (FANB) for remaining loyal to him in the face of so-called Operation Freedom staged by Guaido.

“We are not a weak or helpless country, we have a military power that guarantees peace and national defence. Always Loyal, Never Traitors!” he tweeted.

000000
Popular comments
He is a confirmed traitor & he would certainly do that !