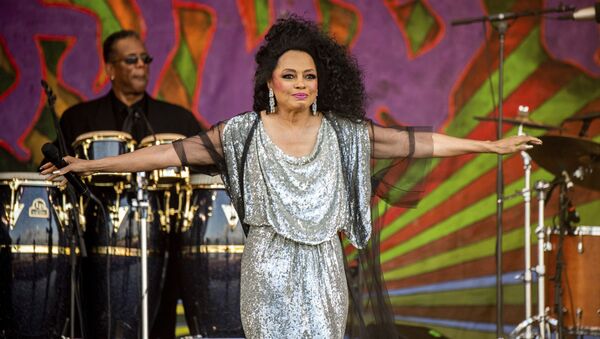 © AP Photo / Amy Harris/Invision/AP
Subscribe
International
India
Africa
In a series of tweets Sunday, American singer Diana Ross expressed that she felt violated during a pat-down search at a New Orleans airport during the weekend.

Ross described her experience with a female Transportation Security Administration (TSA) agent at Louis Armstrong New Orleans International Airport as "over the top," also noting that it made her "want to cry."

​"Ok so on one hand I'm treated like royalty in New Orleans and at the airport I was treated like s**t," the "Ain't No Mountain High Enough" singer tweeted Sunday. Ross, 75, was in New Orleans this past weekend to perform at the Jazz and Heritage Festival.

​Some comments on her tweets were empathetic, with users sharing similar experiences at US airports, while others defended the TSA agent, stating that she was most likely just doing her job.

​Later Sunday, the legendary singer shared a video of herself singing The Supremes' "Stop! In the Name of Love" at the jazz fest on Twitter, saying that she was "feeling better."

​On Monday, Ross expressed gratitude toward TSA agents at airports.

​According to a statement by the TSA obtained by multiple news sources, the video of Ross' screening process was reviewed, and officials verified that the agents involved had followed protocol.

"TSA is committed to ensuring all travelers are treated with respect and courtesy. TSA is aware of concerns presented by Diana Ross about her screening experience at Louis Armstrong New Orleans International Airport this morning," the statement read.

"Initial review of CCTV indicates that the officers involved with Ms. Ross's screening correctly followed all protocols, however, TSA leadership will continue to investigate the matter further. We encourage Ms. Ross to reach out to TSA so we can work with her directly to address her concerns," the statement adds.

Back in 1999, Ross was held at London's Heathrow Airport after touching a security guard during a pat-down. She was eventually released without charges.

"I travel a lot. The security checks usually use metal detectors," Ross told The Associated Press at the time. "This woman went all around my body and up and down my legs. I felt very uncomfortable. I wanted to complain, but no one listened to me."

In response to the pat-down, Ross asked the agent, "How would you feel in this situation?" before touching the agent in a similar manner, which led the official to accuse Ross of assault.