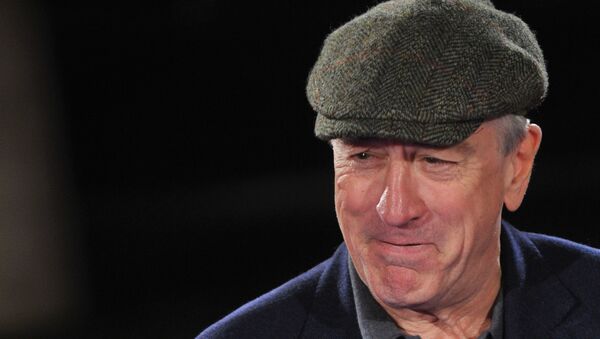 © AFP 2023 / Tiziana Fabi
Subscribe
International
India
Africa
The Oscar-winning star has been one of the most relentless and vocal critics of the current US president, comparing him to Adolf Hitler or branding him a “total loser”, “dumbbell”, and “a wannabe gangster in the White House”. He recently launched a new verbal attack on 45 during the screening of Danny Boyle’s new film at the Tribeca Film Festival.

Famed Hollywood actor Robert De Niro has yet again gone on the rampage against Donald Trump, merging the gist of John Lennon’s hit song “Imagine” with his pet hatred towards the US president. Speaking at the world premiere of the new film “Yesterday”, picturing a world in which no one has ever heard of the British stars except one person, De Niro brought up his dream plot.

“We had an idea for a movie where the world wakes up and no one has heard of Trump. That would make everyone really happy”, he said, according to Deadline.

READ MORE: Rumours Rampant of De Niro Splitting Up With Wife Due to Her Backing Trump

This is not the first time the Oscar-winning star of such top-grossing films as The Godfather Part II, Raging Bull, Taxi Driver, Cape Fear, and Casino has strongly criticised the US president. He engaged in a tirade against Trump just recently during a brief appearance at the Not the White House Correspondents’ Dinner. He told CNN that Trump's time as the US president will become “one of those things” people will look back on and recall with the words “Remember all that stuff, how terrible it was?”

Just days before that he also slammed Trump as a “dumbbell”, claiming that “this guy has proven himself to be a total loser”. And earlier in January, De Niro compared Trump to Adolf Hitler, claiming that like Trump, people thought dictators in the past "looked funny" when they first came to power.

However, Trump did not allow De Niro’s digs to go unnoticed and fought back on Twitter, noting that his true belief is that screen legend may be “punch-drunk”.

…realize the economy is the best it’s ever been with employment being at an all time high, and many companies pouring back into our country. Wake up Punchy!