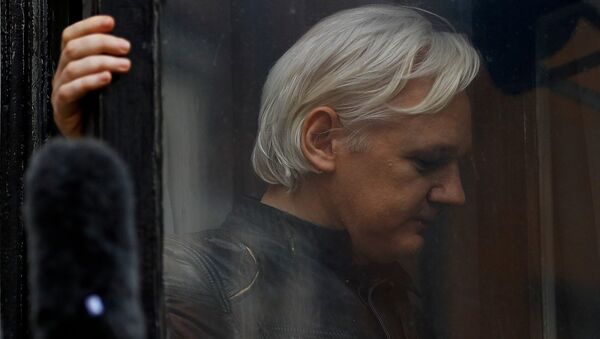 © REUTERS / Peter Nicholls
Subscribe
MOSCOW (Sputnik) - WikiLeaks Editor-in-Chief Kristinn Hrafnsson slammed Ecuador, in his interview for German Der Spiegel newspaper, for doing everything to make the life of WikiLeaks founder Julian Assange, who had been residing in the Ecuadorian Embassy in London from 2012 and until his recent arrest, "miserable."

"Already last year, the embassy started a war of attrition, psychological warfare: cutting off the Internet, installing cell phone jammers, restricting visitors, turning off the heating. Everything was done to make Julian Assange's life miserable… The security staff and diplomats spied on him 24/7. They copied documents from his lawyers, they recorded the visits of doctors," Hrafnsson, who was appointed WikiLeaks editor-in-chief last fall, said in the interview, released on Friday.

UN Rights Experts Call UK's Assange Sentence 'Disproportionate'
He added that WikiLeaks had filed an extortion complaint with Spanish police after over an offer by a Twitter user to provide surveillance material from the embassy.

"The offer was to buy the material for 3 million euros [$3.36 million] — otherwise the information would be spread in the media. This was extortion. I flew to Madrid and had meetings with the special division of the Madrid police on blackmail and extortion. We filed a complaint there and it was taken very seriously by the Spanish police and now it is before a court," Hrafnsson explained, adding that the surveillance material included "104 folders with masses of material on every aspect of Assange's life."

Assange, who gained fame for publishing leaked US government documents detailing abuses of power and war crimes, now faces possible extradition to the United States, where he could be jailed for up to five years on charges of conspiracy to commit computer intrusion. Meanwhile, concerns have been raising that he could also be charged under the Espionage Act. Hrafnsson told Der Spiegel that he did not rule out such a development.

"It is obviously only the first step, and it would be extremely naive to try to maintain that other charges will not be added when he is on American soil," he said.

READ MORE: Assange's Best Hope May Be Change of UK Gov't as He Faces Extradition — Lawyer

When asked to comment on allegations that WikiLeaks was "fed and used by Russia," Hrafnsson stressed that the platform had actually published information about Russia as well.

"It should be fairly well-recognized now that WikiLeaks tries its utmost not to know the source of its submissions. It's our policy, that's why we have a very advanced system, where you can submit information to us without being traced. Not knowing the source is probably the best security you can offer a source," he added.

Expert: Media Did Good Job Focusing on Assange's Personality, Not on Work He Did
Hrafnsson, who worked as WikiLeaks spokesman for six years before replacing Assange as the editor-in-chief, added that he was aware that not only Assange but other people linked to the whistleblowing platform were under investigation.

"As WikiLeaks has been under attack for 10 years, I am aware of the dangers that come with the job. I have been working full-time for WikiLeaks since midsummer 2010. It is obvious that I am in the cross hairs of the US. government, its military and its secret services. We have known since 2014 that not only Julian Assange, but also other people who are connected with the organization are under investigation… [WikiLeaks editor] Sarah Harrison, [WikiLeaks Ambassador] Joseph Farrell and I were informed in December 2014 that our mails were seized because of a grand jury investigating us in an espionage case," Hrafnsson stated.

WikiLeaks editor-in-chief praised Assange for resiliently withstanding the situation he had found himself in.

The United States has until June 12 to provide London with all necessary documents for Assange's extradition.

Assange lived in the Ecuadorian Embassy in London, fearing extradition to the United States, for almost seven years as a political refugee before Ecuador revoked his asylum, citing his violations of international conventions. UK police arrested him on April 11. A London court sentenced Assange on Wednesday to 50 weeks in prison for breaching bail by taking a refuge in the embassy.