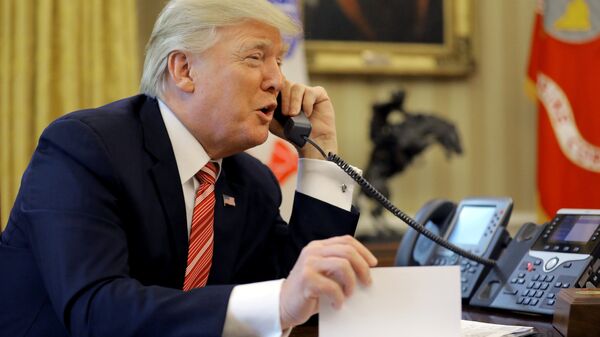 President Donald Trump said that there was "tremendous potential" for a "good" or even "great" relationship between the US and Russia, saying the world "can be a better and safer place" if the two countries got along. Trump tweeted the sentiment a day after his phone call with Russian President Vladimir Putin.

World
Trump Says He Had 'Very Productive Talk' With Putin on Possible Nuclear Accord
On Friday, Trump said he had a "long and very good conversation" with Putin, with the White House indicating that the conversation, which lasted over an hour, included discussion of a possible nuclear accord between Washington, Moscow and Beijing. Other issues included the possible extention of the New START treaty, North Korean denuclearisation, the Mueller report, trade, Ukraine, and the crisis in Venezuela.

Later Friday, speaking to reporters at the White House, Trump said that Putin had told him that Russia was "not looking at all to get involved in Venezuela," and would "like to see something positive happen" in the country. "I feel the same way," he said.

Relations between Russia and the US have remained on the tense side for over five years, with ties deteriorating in early 2014 in the aftermath of the US and EU-backed coup in Kiev, which prompted the Crimean peninsula to break off from Ukraine and rejoin Russia after a referendum. Moscow has marked concern over US sanctions policy, as well as the NATO buildup along Russia's borders in Eastern Europe and the construction of missile shield components in Romania and Poland. The two powers have also voiced disagreements on numerous conflicts around the world in countries including Syria, Libya and Venezuela.