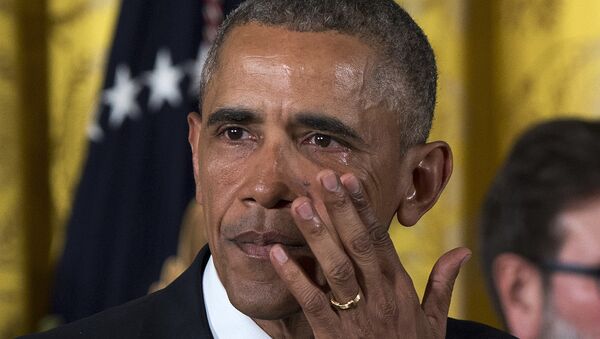 Former President Obama viewed Democratic presidential nominee Hillary Clinton's 2016 loss to President Trump as a "personal insult" and a defeat, according to updates to a 2017 book.

According to the updates to New York Times correspondent Peter Baker's history of the Obama presidency, "Obama: The Call of History," the then-president was overcome with anger in the days following Clinton's defeat to Trump, as Obama saw it as a result of her inability to translate his policy successes into a winnable message.

"Obama may not have been on the ballot, but it was hard not to see the vote as a 'personal insult,' as he had called it on the campaign trail," Baker writes, cited by Fox News. “This stings. […] This Hurts,” Obama said at the time, according to the book.

Obama was struggling with the result of the elections, thinking that the American people "simply could not have decided to replace him with a buffoonish showman whose calling cards had been repeated bankruptcies, serial marriages and racist dog whistles," Baker continued.

“I've got the economy set up well for him. No facts. No consequences. They can just have a cartoon," he told one aide after the election, according to the book.

Obama Urges Dems Not to Form ‘Circular Firing Squad’ Against Dem Candidates
Baker wrote that Obama directed much of his anger at Clinton, who was Secretary of State during his presidency, saying that she ran a “soulless campaign.” He noted that no one forced her to “take hundreds of thousands of dollars from Goldman Sachs and other pillars of Wall Street” and run a poorly-directed campaign that “tested eighty-five slogans before coming up with 'Stronger Together.'”

Obama used to refrain from direct criticism of his successor during the early period of Trump’s presidency but has since joined the chorus of Democrats who have issued sharp criticisms of the current US president’s policies. Obama has also been reportedly talking with Democratic presidential candidates since last November’s midterm elections.