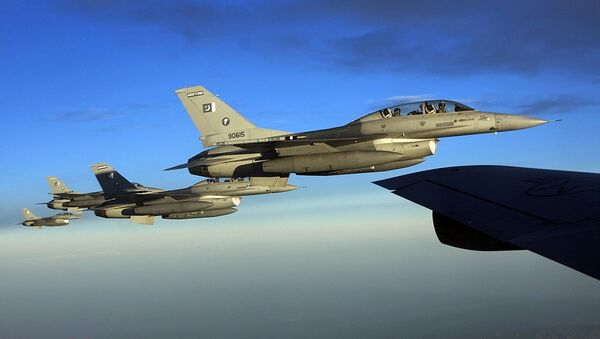 CC0 / /
Subscribe
International
India
Africa
The report comes amid ongoing New Delhi-Islamabad tensions which escalated after a deadly 14 February terrorist attack in Pulwama, India. A Pakistan-based terror group claimed responsibility for the attack and New Delhi accused Islamabad of harbouring and sponsoring the Islamist outfit, a charge which Pakistan has denied.

Pakistan’s airstrikes on Indian Army installations along the Line of Control in Kashmir on 27 February were merely a “demonstration of will” and aimed at misguiding the domestic audience, a report by an Indian think tank claimed.

The report published by the New Delhi-based Centre for Joint Warfare Studies (CENJOWS) argued that Pakistan knew perfectly well that it was “no match for India in a conventional conflict” and that the Pakistani air strikes did not intend to target India’s military or civilian assets.

Pakistan was encouraged by “false bravado and with the intention to misguide their masses”, according to the survey, titled "Reality of Pakistan’s Counter Air Strike on February 27: A Demonstration that Failed".

Referring to an Indian pilot whose MiG-21 fighter jet was shot down during the February 27 dogfight, the report specifically singled out Pakistan’s “hurried announcement” of the “early repatriation” of Wing Commander Abhinandan Varthaman, which the report claims also indicates Islamabad’s reluctance to escalate the military situation.

Additionally, the survey argued that Pakistan planned its air strikes at an altitude that “denied them stealth and also gave Indian air defence a warning time of 10-12 minutes”.

“Planning a strike at 9000h-1000h is militarily illogical as strikes are planned at a time to achieve surprise. At late morning hours, air defences could be expected to be at their best performance augmented by visual observers to detect flights which escape radar detection”, the report noted.

The paper added that the goal of the Pakistani Air Force’s F-16 was not to strike targets on the ground, noting that “missing a target is difficult unless the intention is not to hit”.

“The only inference one can draw is either poor a state of training or intended drop of arsenal was not meant to hit any military or civilian target,” according to the survey.

The paper also claimed that Pakistan could not afford an armed conflict with India because of its difficult financial situation and that “at the same time, it did not want to present an impression to its masses that it has chickened out of the prospective conflict[…]".

The report comes against the background of simmering tensions between Pakistan and India which escalated in late February.

READ MORE: India Asks if US Military Was Present at Pakistan Bases Before Dogfight — Report

On 26 February, India carried out an air strike on alleged terrorist infrastructure targets within Pakistani territory after a Pakistan-based terror outfit claimed responsibility for the 14 February terrorist attack on Indian soil, which claimed the lives of 40 servicemen.

Asia
Pakistan Forces Remain on Alert Amid Escalation With India, Border Trade on Hold
On 27 February, Pakistan retaliated by conducting air strikes targeting Indian territory and in the ensuing dogfight, reportedly downed two Indian aircraft. A pilot, who managed to eject, was released a few days later in what Islamabad described as a "peace gesture".

India, however, confirmed the loss of only one of its warplanes and claimed that its downed MiG-21 Bison jet had shot down a Pakistani F-16 during the aerial combat. Pakistan denies losing any of its fighter jets.

Members of the Jaish-e-Mohammad group are considered terrorists by India and located on Pakistani soil across the so-called Line of Control, separating India- and Pakistan- controlled areas of Kashmir.

India has repeatedly accused Pakistan of supporting the militants and having a “direct hand” in the 14 February attack, while Islamabad rejects the allegations.