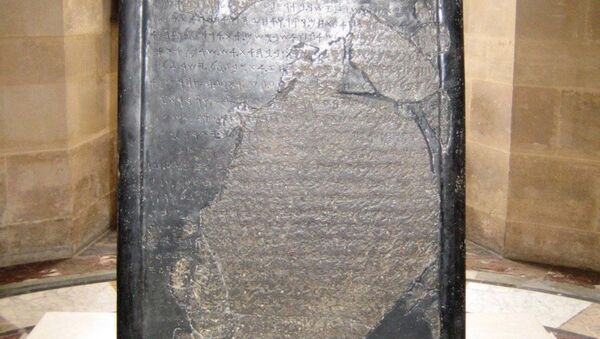 The new claim is based on a probe into the so-called Mesha Stele, an ancient monument that connects the Biblical account with extra-Biblical sources.

Researchers studying an ancient inscribed stone have come to the conclusion that the artefact was referring to a king mentioned in the Old Testament — a discovery that may support the debated historicity of the Bible.

The scientists said that a line inscribed on the Mesha Stele — a stele with writings in the Moabite language set up in the 9th century B.C. by the ruler of the Moab kingdom in what is now Jordan — invoked the name of Balak, a Moabite king described in the Bible.

The stele "was one of, if not the, first artefact discovered in the beginnings of modern archaeology in the 19th century [A.D.] that made some connection between the Bible and a record written by an external source," said Samuel Boyd, assistant professor of Jewish studies and religious studies at the University of Colorado.

"Its discovery sparked major waves of archaeological research in the area and antiquities trading."

One of the lines on the stele, which is partly missing, was previously thought to be referring to the ‘House of David' but the research team say this is not the case. They argue that the missing part should contain a personal name, and King Balak is the most likely candidate.

Balak appears in the Book of Numbers, the fourth part of the Hebrew Bible, where he tried to engage the prophet Ballaam to curse the Jews after they fled from Egypt to the Promised Land.

"We believe Balak was a historical figure like Balaam, who, before the discovery of the famous Deir Alla inscription in Jordan in 1967, was considered an 'invented' character," said Professor Israel Finkelstein of Tel Aviv University.

The research team has published their findings in the Journal of the Institute of Archaeology of Tel Aviv University.