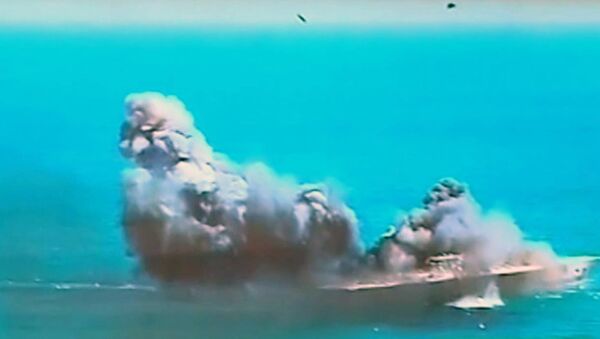 Tensions between Washington and Tehran continue to mount amid US threats to bring Iranian oil exports down "to zero" and Iranian officials' warnings that the country may close the strategic Strait of Hormuz if its security was threatened.

Iranian Foreign Minister Mohammad Javad Zarif does not believe that a war between Iran and the US was imminent or inevitable, but does not exclude the possibility of some "accident" 'spiraling' into a military conflict.

Speaking to The Independent, the foreign minister indicated that the Strait of Hormuz, a key waterway through which some 20 percent of the world's oil supplies pass, may be the spark that could ignite a war, particularly in the event of a lack of communication between the US military and Iran's Islamic Revolutionary Guard Corps, with each side recently labeling the other as "terrorists," in this narrow passageway.

US Sanctions on Iran: India Ready to Procure Crude Oil from 'Other' Countries
Zarif also recalled a January 2016 incident in which two US Navy vessels entered Iranian waters in the Persian Gulf and were detained by the IRGC. Here it was possible to avoid escalation thanks to the existence of a direct line of communication between Zarif and then-Secretary of State John Kerry. "But today there is no such line of communication between the Iranian foreign minister and US Secretary of State. So a similar incident in the Persian Gulf could quickly get out of hand," The Independent noted.

Zarif spent much of last week in the US, making appearances on US media and speaking to policy experts about the dangers of another war in the Middle East. The trip included an interview with Fox News, during which the foreign minister said he felt President Trump himself had no interest in war, but that some of his officials and US allies, including National Security Advisor John Bolton, Israeli Prime Minister Benjamin Netanyahu, Saudi Crown Prince Mohammed bin Salman and UAE Prince Bin Zayed, were interested in "dragging the United States into a conflict."

In a separate event last week, Zarif warned that Iran would continue selling its oil abroad despite US threats and warned that Washington should prepare to face "consequences" if it took "the crazy measure" of trying to prevent Iran from selling its oil.

Iran's Khamenei Urges Country to Take Up 'Battle Formation' Against US Plotting
Long-standing tensions between Iran and the United States took a turn for the worse in May 2018, when Washington unilaterally withdrew from the Iran nuclear deal and began slapping Iran with several rounds of sanctions, including energy restrictions aimed at bringing Iran's oil exports down "to zero", as well as banking restrictions and other measures meant to cripple the country's economy.

In late 2018, the US granted eight major importers of Iranian oil with temporary waivers exempting them from the possible US secondary sanctions. The wavers formally expired on Thursday, with the US Treasury giving no indication of any plans to extend them. Saudi Arabia and the UAE have promised to increase oil production to substitute Iranian oil, with Iran warning that its fellow OPEC members' policy would not be left unanswered.