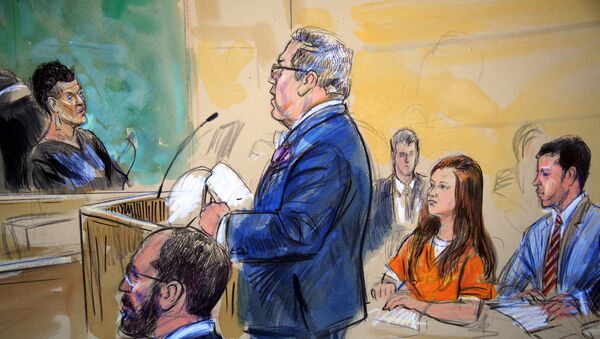 On April 26, a US federal court sentenced Butina to a year and a half in prison on charges of conspiring to act as a foreign agent in the United States. Currently she serves her term in an Alexandria, Virginia detention centre near the nation's capital of Washington.

"Of course she will not be staying in Alexandria. Most likely she will be sent to Alabama or West Virginia," Potapov said on Friday.

Maria Butina Speaks to Press for First Time Since Detention in US (VIDEO)
He explained that according to Butina's lawyer Robert Driscoll federal prisons in Alabama and West Virginia have low security levels.

Butina does not know the exact day of the potential transfer but the priest suggested that it may happen soon.

"Usually after my visits I leave books that I brought her at the front desk for the chaplain, but this time they refused to take books," Potapov said. "When I asked why, they said 'we cannot tell you.' I suspect this is probably because they want to move her soon. In this case, she cannot take anything along with her."

Russian Orthodox Church Outside Russia (ROCOR) has parishes in West Virginia. Potapov said he will ask local priest to visit Butina and give her spiritual advice if she will continue her term there. He also promised to visit Maria occasionally and send her religious books by mail.

Potapov also said that Butina hopes to be released by November 23.

"Of course Maria was hoping that she would be released by now. Now she is hoping that by November 23 she will finally be a free woman," Potapov said after the visit on Friday.

The priest said Butina's term completes at the end of the year but for good behavior she might be released sooner.

World
Putin Outraged Over Butina's Jail Term in US: 'Travesty of Justice'
Butina, who has been in US custody since mid-July 2018, pleaded guilty to a single count of conspiring to act as an unregistered foreign agent as part of a plea deal. She had requested a sentence of time served.

The Russian Foreign Ministry said the sentence is a disgrace for the US judicial system and accused the court of carrying out a "clear political order."

In November, the Russian Embassy in the United States said US authorities kept Butina in a single cell under solitary confinement for 67 days, exceeding the limit recommended by the Nelson Mandela Rules for the treatment of prisoners.