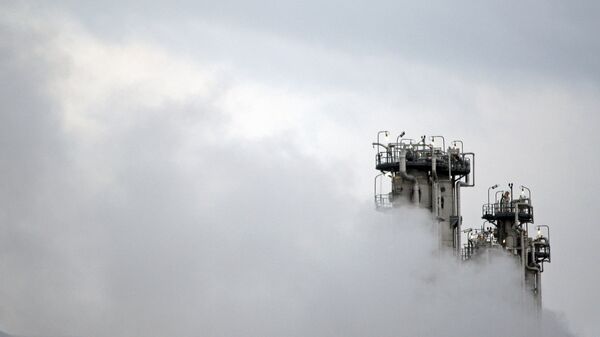 © AP Photo / Mehdi Marizad
Subscribe
International
India
Africa
The Trump administration has decided to renew waivers for Iran’s limited nuclear power program, albeit on terms half as long as before. However, it has also revoked other waivers allowing disposal of excess nuclear material, putting pressure on Tehran to end all uranium enrichment to stay within the international deal signed in 2015.

The 2015 Joint Comprehensive Plan of Action (JCPOA) ended international sanctions against Iran in exchange for its rejection of a nuclear weapons program. The deal, signed by Tehran and the US, UK, France, Germany, Russia and China, provided for a limited amount of nuclear fuel to be produced by Iran for experimentation and nuclear power, but not of the quality or quantity necessary to produce a nuclear bomb.

Asia
US Sanctions on Iran: India Ready to Procure Crude Oil from 'Other' Countries

While Washington unilaterally left that agreement last May, it has permitted nations that remained in the deal to engage in nonproliferation activities and nuclear research at three sites in Iran — Fordow, Bushehr and Arak — without facing sanctions. Assistant US Secretary of State Christopher Ford announced on Friday that these waivers would be renewed, but this time only for 90 days instead of 180 days, as they had been before.

However, that deal has come at a price: Washington has also revoked two waivers allowing Iran to send its excess heavy water to Oman and to export excess enriched uranium, a practice it used to remain within the strict limits of the JCPOA. In turn, Tehran received from its trade partners "yellowcake" uranium, a type of the radioactive element with a much lower concentration than enriched fuel.

"We are tightening restrictions on Iran's nuclear program as part of our pressure campaign," US Special Representative for Iran Brian Hook told Bloomberg for a Friday article. "Iran cannot have any path to a nuclear weapon."

Two of the three facilities given waivers have relationships with foreign countries; the heavy water reactor at Arak is being redesigned with Chinese help, according to the JCPOA; the Bushehr Nuclear Power Plant was built with help from the Soviet Union, and today Russia supplies enriched uranium for the plant and takes away its spent fuel rods. The third site, Fordow, is a uranium enrichment facility. Its inclusion in the waivers has drawn heavy criticism because of the potential for the facility to be used to produce weapons-grade plutonium, which is derived from uranium.

While US President Donald Trump and hawkish associates such as National Security Adviser John Bolton have pressed for a total cessation of all Iranian nuclear fuel refinement, the US State Department is forced to navigate a difficult and narrow path between, on the one hand, constraining Iranian production so as to avoid the perceived danger of an Iranian nuclear program, and on the other, pushing Tehran into such a desperate situation that it departs from all cooperation with the JCPOA powers and resumes its pre-2015 activities — something it's threatened to do more than once in the last year.

"Our leadership is not comfortable with any mechanism that allows uranium enrichment," Ford said. "We don't want to give Iran a supposed excuse to continue to enrich."