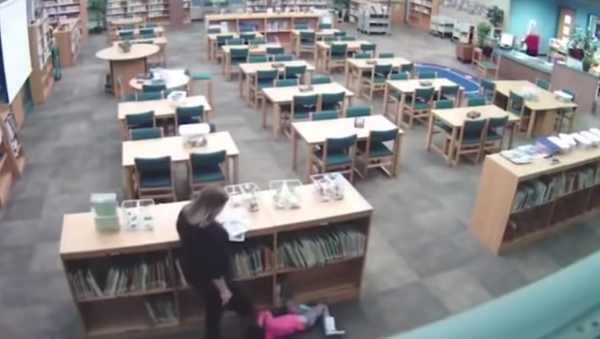 The incident unfolded on February 21, 2019, between the stacks at the school's library. Surveillance video begins with the student lying against a bookshelf as other pupils line up to leave the room. After Smith holds a brief conversation with another staffer, she turns her attention to the child, who is seen hiding inside the bookshelf.

Within seconds, Smith yanks the student out from the cubby, and a scuffle ensues between the pair. It's after the second staffer moves out of sight of the pair that Smith proceeds to kick the student in the back.

​Although Smith does appear to gesture toward the other adult prior to the strike, that person only appears to approach the teacher and the pupil afterward, as all parties move toward the exit. The student is seen walking out of the room with her arms crossed.

Viral
‘Absolutely Pathetic’: US Teacher Denounced for Note on Student’s Test (PHOTO)
Local media reports indicate that the mother only found out about what happened after her daughter spilled the beans. The frustrated mother, who wishes to remain anonymous, eventually got in contact with Smith and recorded a conversation in which the teacher claimed the child had injured herself.

"I'm not surprised [about the red marks on the student's arm] 'cause she shoved herself into that book shelf and books that she went to kick. I mean she kicked me a couple times," Smith said on the recording. "She got really mad and really fast."

Smith was immediately placed on administrative leave after school administrators were made aware of the incident. She was fired March 15.

The mother told NBC News that she was "deeply disturbed" by how Smith acted toward her daughter.

"As a parent, I trusted the school with my daughter's safety, and had I not pushed to find information on my own, the safety of all those students could still be at risk," she said. "No other family should have to experience this, and I hope school officials take meaningful action to prevent and respond to future incidents."

WATCH: Surveillance Shows US Cops Hitting, Dragging, Tasing Student
Dan Zmijewski, the family's lawyer, told USA Today that the student is currently in therapy, and that she has been advised to not return to school until next year. The student has been enrolled in a home-based education program for the time being.

An investigation into the incident was also launched by the Shawnee Police Department, according to the outlet. The Johnson County District Attorney's Office told NBC News that it is reviewing a criminal case. The family is also pursuing a civil suit.