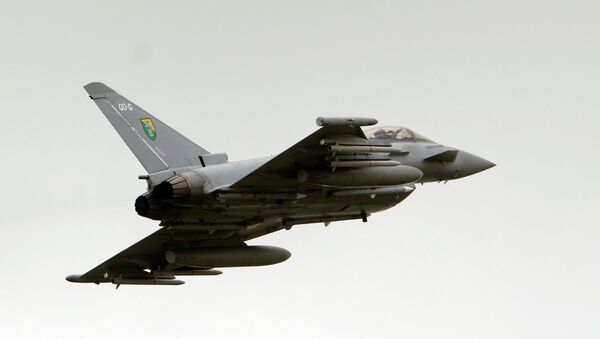 © AP Photo / Donato Fasano
Subscribe
International
India
Africa
NATO has beefed up its presence in the Baltic region considerably recently ahead of a series of massive army and naval drills taking place over the next two months.

A unit of four Royal Air Force Eurofighter Typhoon warplanes officially started their airspace policing mission over the Baltic states on Thursday, taking over from the German Luftwaffe, whose planes had carried out the rotating patrols since last August.

The air policing mission was handed off to the RAF at a solemn ceremony attended by Estonian, British and German military personnel at the Amari Air base near Tallinn, Estonia, about 200 km west of the country's border with Russia.

"The participation of NATO members in various missions and operations, such as protecting the airspace over the Baltic states, shows that their commitments, both to the alliance and their allies, are not merely signatures on a piece of paper," Herem said, according to a press release by the Estonian Defence Forces' General Staff.

Prior to making their way back to Germany, the Luftwaffe fighters will take part in NATO's ongoing Spring Storm drills, with the RAF contingent also taking part in the exercises, which will continue over the next two weeks until mid-May.

The Baltic states of Estonia, Latvia and Lithuania do not have suitable aircraft to conduct air patrols themselves, with other NATO allies chipping in to patrol their airspace on a rotational basis since the states' entry into the alliance in 2004. Amari Air base has been used for the missions since 2014, with patrolling also carried out from the Zokniai air base near Siauliai, Lithuania.

The RAF Typhoons will engage in the air policing mission over a fourth month period, with the mission including quick reaction alert duties which would see the planes scramble in case of airspace violations.

US Spy Planes Spotted Again Near Russian Borders – Report
This is the RAF Typhoons' second deployment to Estonia since 2016. In previous missions, NATO fighters have reported scrambling repeatedly to intercept Russian military aircraft flying back and forth between continental Russia and the Russian exclave of Kaliningrad along the Baltic Sea.

The Russian military has reported a significant uptick in NATO aerial and reconnaissance missions along Russia's borders in the Baltic and Black Seas, as well as around Russian based in Syria, in recent years. In 2018 alone, the defence ministry reported tracking around 3,000 foreign combat aircraft, including about 1,000 spy planes and drones, flying near Russia's maritime and land borders. The Russian military has repeatedly called on NATO and the Pentagon to put an end to such flights, with these requests going unanswered. Russian air power has been scrambled repeatedly to intercept aircraft and force them to change course if they approached too close to Russian airspace, with the US Air Force calling many of these interceptions "unsafe" and "aggressive."