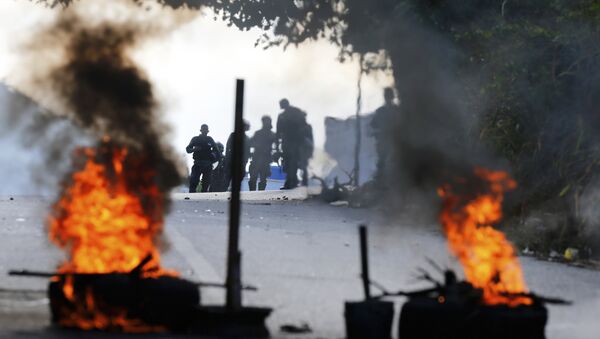 "Mexico condemns any attempt of military intervention in Venezuela or any other country in Latin America. It will be a disaster and a huge mistake if it happens," Mexican Foreign Secretary Marcelo Ebrard said at the press conference in Mexico City.

According to Ebrard, Mexico strongly advocates a peaceful solution to the Venezuelan conflict, and this stance coincides with the one of Berlin.

German Foreign Minister Heiko Maas, in turn, reiterated that the European Union was always open to facilitate the dialogue between the parties to the Venezuelan political conflict. At the same time, he did not rule out the possibility of strengthening EU sanctions to influence the situation in Venezuela, according to the Economista media outlet.

US Military Intervention in Venezuela is 'Very Unlikely' - Professor
READ MORE: US Authorities Arrest 3 People at Protest at Venezuelan Embassy in Washington

Tensions in Venezuela have been high since January, when opposition leader Juan Guaido proclaimed himself interim president and was supported by the United States and its allies, including Germany and several other EU countries. President Nicolas Maduro, in its turn, was backed by Russia and China, among other states, as the only legitimate president of Venezuela. Mexico and Uruguay have refused to recognize Guaido, declaring themselves neutral and offering to promote crisis settlement via dialogue.

The situation in Venezuela remains tense after on Tuesday, the Venezuelan opposition initiated a fresh coup attempt in a bid to oust Maduro. The government, however, subsequently said that the coup attempt had failed.