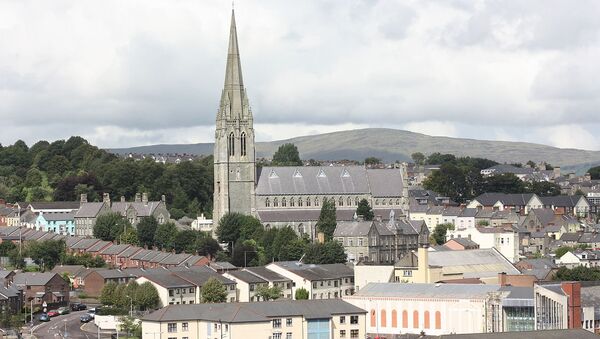 In 1948 Short Brothers began producing airliners, aerospace components and missiles in Belfast. The factory was sold to Canada's Bombardier in 1989.

Canadian aerospace giant Bombardier announced on Thursday, 2 May, plans to sell its plant in Belfast, which produces wings for Airbus aircraft aswell as aerospace components for a number of other aircraft.

"As the company moves to optimise its global manufacturing footprint, Bombardier will pursue the divestiture of the Belfast and Morocco aerostructures businesses. These are great businesses with tremendous capabilities," the Montreal-based company said in a statement.

This is a bit of a bombshell for Northern Ireland — Bombardier to sell Belfast business. The aerospace giant employs 4,000 in Northern Ireland. Not clear who would be interested in buying plant given threat of Brexit trade barriers

​Bombardier cut 490 jobs in Belfast last year as part of a cost-cutting drive but remains Northern Ireland's biggest manufacturer, with around 3,600 staff.

It is difficult to see who would want to buy the plant considering the current uncertainty regarding Brexit and the Irish border.

Bombardier being put up for sale — on day of NI's local elections — is potentially much, much more consequential for the DUP's relationship with the government than Williamson's departure. https://t.co/sphoTvHDq5

​"We understand that this announcement may cause concern among our employees, but we will be working closely with them and our unions as matters progress, and through any future transition period to a new owner," said the company.

#Bombardier today announced the consolidation of its aerospace assets into a fully integrated Bombardier Aviation business unit, to better support our customers and generate value for shareholders —> https://t.co/XOEGAVMvoP pic.twitter.com/gus8ZzouUz

​Trade union leaders have asked for "reassurances" for workers.

"Our members — and their families — have already suffered a terrible year. Bombardier jobs are absolutely vital to Northern Ireland's economy and it's time workers were treated with the respect they deserve," said Michael Mulholland, an organiser for the GMB trade union.

"Bombardier jobs are absolutely vital to Northern Ireland's economy and it's time workers were treated with the respect they deserve," he added.

Statement on announcement from @Bombardier that they are putting Belfast operations up for sale. pic.twitter.com/awDIBugVLJ

​Bombardier has had a rough ride in the last couple of years.

In 2017 US President Donald Trump threatened to impose import duties of 292 percent on Bombardier after coming under pressure to support US manufacturer Boeing.

But in January 2018 the US International Trade Commission (ITC) voted unanimously against Boeing, nixing Trump's planned tariffs and protecting jobs in Belfast.

Aircraft and aerospace parts have been manufactured in Belfast since the 1940s and the company, Shorts, was bought by Bombardier in 1989.

Bombardier is also putting up for sale a factory in Casablanca, Morocco, which it only built in 2011.