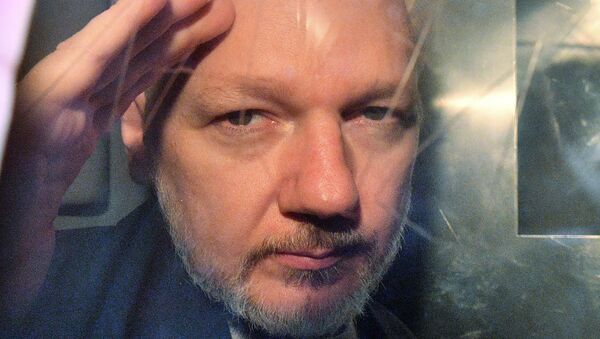 © AFP 2023 / Daniel LEAL-OLIVAS
Subscribe
International
India
Africa
Assange was arrested by UK authorities on 11 April at the request of the US government. The publisher now faces extradition to the United States on charges of conspiring to break into a Pentagon computer to leak classified information.

Wikileaks founder Julian Assange told a London court on Thursday that he does not want to face extradition to the United States.

At a court hearing, he stated that he was doing "journalism that has won many awards", and he is determined to fight extradition.

Julian Assange has appeared by video from Belmarsh. Is asked by judge if he wants to consent to US extradition.
"I do not wish to surrender myself for extradition for doing journalism that has won many many awards and protected many people"
Judge: "I'll take that as a decline"

​His statement was made during a hearing on Washington's request to send Assange to the US which started at 10 am local time (09:00 GMT) in Westminster Magistrates' Court.

LIVE UPDATES: Hearing on US Request for Assange's Extradition
Meanwhile, a RIA Novosti correspondent reported that Washington failed to provide complete information regarding the publisher's extradition, therefore, the UK court has ordered it to present documents by 12 June.

Earlier in the day, a spokesperson of the Australian Department of Foreign Affairs and Trade commented on the whistlerblower's case saying that the Australian government continues to provide WikiLeaks founder Julian Assange with consular assistance, while he is currently in custody in the United Kingdom.

Following his arrest on 11 April at the Ecuadorian embassy in London, Washington demanded to send Assange to the US; the famous whistleblower has been accused of conspiring to commit computer intrusion. WikiLeaks, for its part, said the United States wanted to build an espionage case against Assange. An espionage charge can carry the death penalty or imprisonment for life.