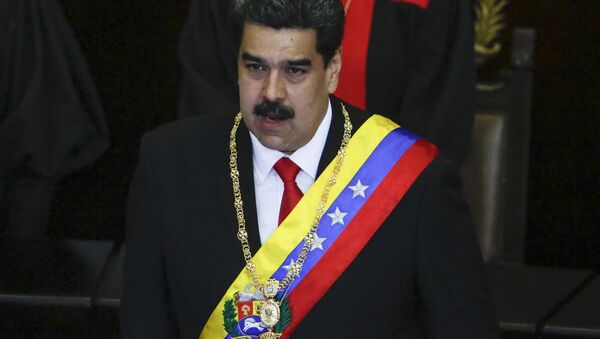 © Sputnik / Stringer
/
Go to the mediabank
Subscribe
International
India
Africa
Venezuelan President Nicolas Maduro in his speech said that the country's government is ready to adopt a plan of changes to correct mistakes.

"On Saturday, May 4, and Sunday, May 5, I am announcing a great national day of dialogue, action and suggestions from all the branches of the public authority to allow them to tell the Bolivarian government and Nicolas Maduro what should be changed for the sake of the great plan of changes in the Bolivarian Revolution. I would like to adopt a plan to change everything and improve everything and fix mistakes," Maduro told his supporters at a Labor Day demonstration in Caracas.

'Nerves of Steel': Nicholas Maduro Urges Venezuelans to Say 'No' to US Meddling
The president called on the Bolivarian congress of people of Venezuela, an association that includes over 80 public organizations, to carry out a session in order for his suggestions to be adopted during the special dialogue day on Saturday and Sunday.

Maduro also called on the United Socialist Party of Venezuela and the Great Patriotic Pole alliance, both led by him, to engage in these activities.

"[We should] fight with both hands — defend our motherland from plots, betrayals, coups and threats; and advance in work, harvesting, industry and necessary changes," Maduro pointed out.

Maduro called on Venezuelans to take to streets in case of a fresh attempt to overthrow his government amid turmoil in the South American country.

"If one day, we wake up to the news that a small group wants to use weapons, everyone should go to the streets and defend democracy and freedom. Do not hesitate even for one second," Maduro told his supporters.

The president also pledged that in the near future, he would demonstrate proof about the involvement of some individuals in Tuesday’s coup attempt.

Notably, the president said he had read a European media report suggesting that US National Security Adviser John Bolton led the Tuesday overthrow operation and contacted the governments of several other Latin American countries on the issue.

"I am asking the United States to investigate the illegal actions and the government overthrow by John Bolton in relation to the Venezuelan democracy," Maduro insisted.

The president also spoke about five military service members and three police officers who received gunshot wounds during the unrest on Tuesday. Maduro said their condition was stable and their lives were not in danger.

Pompeo Backpedals on US Claims That Venezuelan Officials Ready to Abandon Maduro
Maduro reiterated his loyalty to Venezuelans and called on them to be loyal to him, too.

The president also dismissed on Wednesday claims by US officials that a group of high-ranked Venezuelan officials had allegedly committed to back the overthrow of the president, saying they were lies.

"They say that a group of high-ranked Venezuelan officials was engaged in talks with the US government to allow for the coup. They claim that. They refer to a group of honest and loyal Venezuelan officials. The organizers of the government overthrow lie not only to themselves but to the US imperialism, too, and make it believe that I sought to leave the country," Maduro said on Wednesday.

On Tuesday, the Venezuelan opposition, led by Juan Guaido, who has proclaimed himself the country's interim president, made another attempt to depose Maduro, staging a demonstration in front of La Carlota military base. Guaido called on the people of Venezuela and the army to take to the streets to complete the operation to overthrow Venezuela's legitimate president. In response, Maduro said that the commanders of all regions and zones of integral defence had reiterated their full loyalty to the people, constitution and homeland. The escalation led to unrest and violence.

Bolsonaro Claims 'Fracture' 'Getting Closer' to Venezuelan Army Leadership
The situation in Venezuela remains tense since January when Guaido proclaimed himself as an interim president. Washington immediately endorsed Guaido, called on Maduro to step down and seized billions of dollars’ worth of the country’s oil assets. Moreover, a number of US senior officials, including President Donald Trump, have repeatedly stated that all options remain on the table with regard to the Venezuelan crisis, including military action.