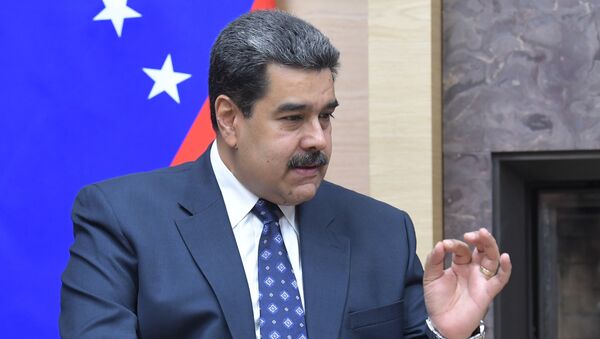 Maduro has delivered "a message to the Venezuelan people and the world" in a live stream, during which he said that he had appointed prosecutors to investigate a coup attempt in his country. He also added that a number of people are being questioned in connection with the issue.

Maduro Supporters Hold Rally Near Presidential Palace in Caracas (VIDEO)
In his speech, Maduro said that the coup was led by Venezuelan opposition figure Leopoldo Lopez. Earlier in the day, Chile's foreign minister said that Lopez had entered the Chilean diplomatic mission in Caragas, updating later that he'd moved to Spain's Embassy.

Maduro also said that five military staff were injured during the unrest on Tuesday, adding that two of them were in critical condition.

On Tuesday morning, Venezuelan opposition leader Juan Guaido and his supporters gathered in Caracas on a highway in front of La Carlota military base. Previously, Guaido had called on the people of Venezuela and the army to take to the streets to complete an operation to overthrow President Maduro.

"This cannot go unpunished. I have spoken to the attorney general, and he has appointed three national prosecutors who are questioning everyone involved in this event, and they are tasked with investigating and filing criminal charges," Maduro told the state television.

The Venezuelan president has also announced that he appointed Gen. Gustavo Gonzalez Lopez as the head of the Bolivarian National Intelligence Service of Venezuela (SEBIN).

"I welcome the new director of SEBIN, Gen. Gonzalez Lopez, who is always fighting, always active", Maduro said during a meeting with his supporters, as broadcast by Venezuela's state television.

FAA Prohibits US Air Operators from Flying Below 26,000ft Over Venezuela
Gonzalez Lopez already headed SEBIN in 2018, but was then replaced by Gen. Manuel Christopher Figuera.

Meanwhile, Venezuelan Ambassador to the EU Claudia Salerno has stated that Caracas does not expect the EU states to support the US military's actions in the Latin American country.

Large-scale protests against Maduro began in Venezuela on 21 January, soon after he was sworn in for a new term. National Assembly head Guaido proclaimed himself interim leader of the country. A number of Western countries, including the United States, backed his claim. Maduro, in turn, has accused the United States of trying to orchestrate a coup in order to install Guaido as its puppet. Russia, China, and a number of other countries have voiced their support for Maduro as the only legitimate president of Venezuela.