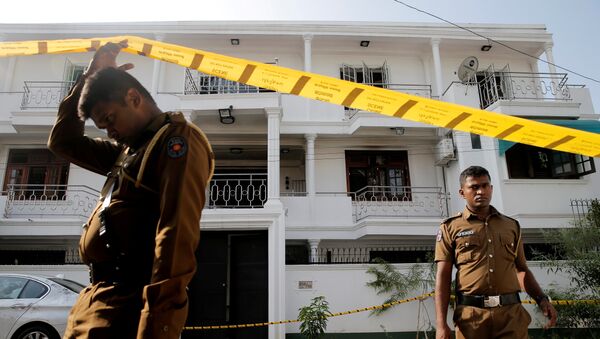 © REUTERS / Thomas Peter
Subscribe
Sri Lanka’s Department of Muslim Religious and Cultural Affairs has begun scrutinising all registered mosques in the island nation following the series of Easter Sunday attacks on churches and hotels which left 253 people dead and over 500 injured.

New Delhi (Sputnik): As part of Sri Lanka's ongoing resolve to address the security questions raised by the country's worst-ever terrorist attack last month, the island nation of approximately 22 million people has decided to ban all mosques which are believed to be influenced by extremists.

"Measures are being taken to ban the mosques operating under the authority of the National Thowheed Jammath and Jamathei Millathu Ibraheem," MRM Malik, Director of the Department of Muslim Religious and Cultural Affairs said on Wednesday.

Sri Lankan President Maithripala Sirisena had earlier banned  National Thowheedh Jamaath (NTJ) and Jamathei Millathu Ibrahim (JMI) groups, which are suspected of being behind the Easter Sunday blasts on 27 April.

The director has instructed officials to report about those mosques operating under the influence of NTJ and JMI in their districts within a week.

Sri Lanka Bans Promoting Religious, Extremist or Radical Ideologies
The Sri Lankan government will also introduce stringent rules curtailing the establishment of mosques in the country in the future. Currently, over 2,000 mosques have been registered by the Department of Muslim Religious and Cultural Affairs in Sri Lanka.

"The permission for these (2,000) registered mosques will be investigated in the coming weeks," the department said.

On Sunday, the department asked the Board of Trustees of the mosques to issue an identity card to the Imam (Islamic preacher), Muazzin (who summons the faithful to prayer from a minaret) and other workers of their mosques in view of the prevailing situation in the terror-hit country.

Since the 21 April blasts, several religious leaders have been taken into custody. Police have seized arms and ammunition during massive raids across the country.

​President Sirisena on Tuesday issued a notification amending the Emergency Regulations under Section 5 of the Public Security Ordinance to include a prohibition on involvement in religious, extremist or radical ideologies.

Sri Lanka, where the majority of the population is Buddhist, has also banned the use of face covering clothing such as the Niqab and Burqa to strengthen national security.

The cable operators of Sri Lanka, in a suo motu move, have removed controversial Islamic preacher Zakir Naik's Peace TV from their channel list. India and Bangladesh had already banned the channel founded by Naik.