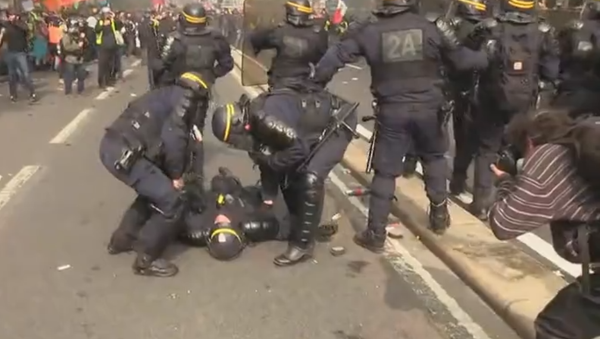 It is unclear what made the officer drop on the ground, however, RT France reported citing its correspondent that the law enforcer was hit in the face by a projectile, allegedly partly made of a paving slab.

A law enforcer wearing a riot gear out of sudden collapsed as the clashes involving police and protesters were raging at Labour Day demonstrations on Wednesday in Paris.

The moment when the police officer fell on the ground was captured on video which was later uploaded online.

This comes at a time when on 1 May, France's Yellow Vests protesters took to the streets of Paris along with labour unions, pensioners, students and other citizens to mark International Workers' Day.

At the same time, the event was attended by the representatives of the so-called 'black block' movement who displayed particularly aggressive behaviour during the recent rally, reportedly throwing glass bottles and beer cans, aiming at the law enforcers.