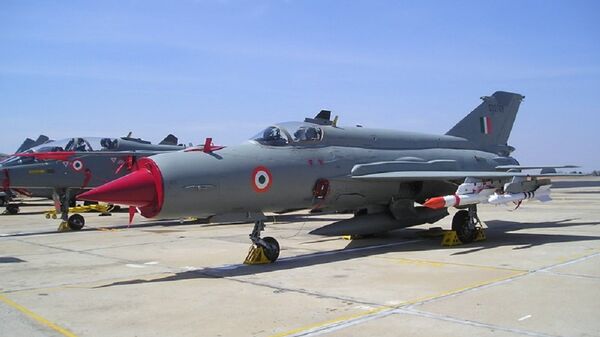 While formally naming the response “Operation Swift Retort”, Pakistan’s Chief of Air Staff said the PAF’s retaliatory action to the Indian airstrike in February was a demonstration of firm resolve, capacity and capability in thwarting hostile actions against the country.

New Delhi (Sputnik) — Pakistani Air Chief Marshal Mujahid Anwar Khan on Wednesday said his country's response on 27 February to the Indian airstrike a day before is worth remembering in history, adding that if such a response is require again it would be more intense.

"PAF response on 27 February 2019 against the enemy aggression will be remembered in history as ‘Operation Swift Retort'", Khan said while addressing the 264th Air Staff in Islamabad on Wednesday.

Stating that every rank and file of the Pakistani Air Force (PAK) deserved special appreciation for proving equal to the task at forward operating bases during these testing times, the air chief warned that "in case of any misadventure by the adversary, PAF response would be even stronger than before".

"In your [Indian] rhetoric, you keep using nuclear power as a threat… Nuclear powers are not a threat, they are a weapon of deterrence that should not be mentioned lightly…Do not test our resolve," Ghafoor said on Tuesday.

India conducted an airstrike in the early hours of 26 February on alleged terror infrastructure in Pakistani territory after a Pakistan-based terror outfit claimed responsibility for a deadly terror attack on Indian soil.

The following day, Pakistan retaliated by conducting airstrikes in Indian territory and in the ensuing dogfight reportedly downed two Indian aircraft. A pilot who ejected was released a few days later in what Islamabad described as a "peace gesture". India, however confirmed the loss of only one of its warplanes and claimed that its downed MiG-21 Bison jet had shot down a Pakistani F-16 during the aerial combat. Pakistan denies losing any of its fighter jets.