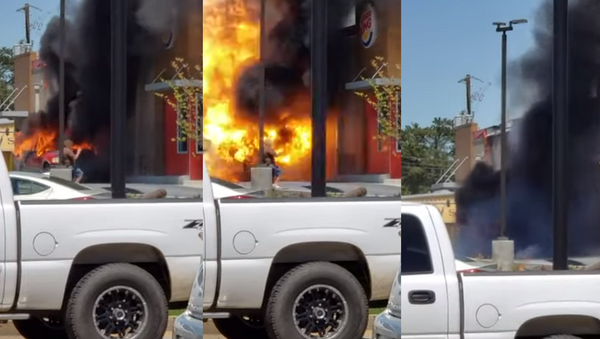 A whopper of a boom!

A combination of quick thinking and poor positioning caused Arkansas motorist Ron Daniel, 78, to suffer first-degree burns after his truck exploded in a Burger King drive-thru.

Daniel, speaking to KARK-TV, claims he had just purchased a propane tank and was stopping for a bite to eat when he began to hear a hissing noise. Realizing the tank was leaking, the motorist first attempted to shut the tank off.

"The minute I stuck my hand in and touched it, it burst into flames," Daniel told KARK-TV.

Unfortunately, Daniel only positioned himself a few meters away from the vehicle while waiting for fire officials, putting himself too close for comfort when his car exploded, as seen in the short footage.

Though Daniel was released from the hospital within hours and is now doing well, he did tell reporters that he is a little peeved he was charged for two burgers he never got a chance to enjoy.