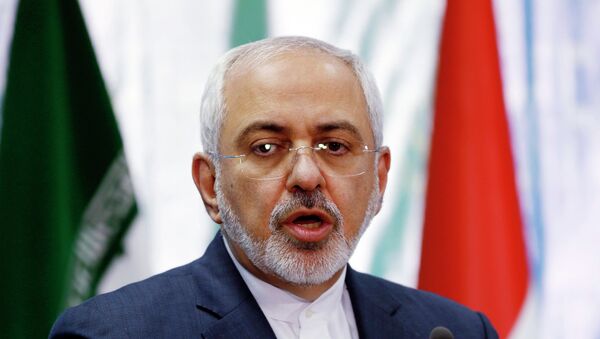 © REUTERS / Ahmed Saad
Subscribe
President Donald Trump is working to designate the Muslim Brotherhood as a foreign terrorist organisation, the White House said on Tuesday, which would lead to sanctions against Egypt's oldest Islamist movement.

Iranian Foreign Minister Mohammad Javad Zarif criticised a US plan to designate the Muslim Brotherhood* as a terrorist organisation in Doha on Wednesday.

"The US is not in a position to (..) start naming others as terror organisations and we reject any attempt by the US in this regard," he told reporters on the sidelines of a conference. "The US is supporting the biggest terrorist in the region, that is Israel."

According to a statement White House Press Secretary Sarah Sanders issued on Tuesday, Trump had consulted with his national security team about giving the Muslim Brotherhood the status of a foreign terrorist organisation, as well as leaders in the region who share his concern.

The report also suggested that US Secretary of State Mike Pompeo, as well as National Security Advisor John Bolton, favoured the idea. However, the US Department of Defence together with several national security and diplomatic officials are opposed to the move and have suggested a more limited step instead.

The US statement concerning the designation of the Muslim Brotherhood came after Egyptian President Abdel Fattah el-Sisi had reportedly called on the US president to make the move during the course of a visit to the White House that took place on 9 April.

000000
Popular comments
Friend let's the American to sanctions as much as possible. It has not meaning other than to the super corrupts, country sellers and mercenaries and all that western vassals countries and disgraced countries like Peru, Colombia and Chile. Colombia is a shame of poverty however they want to joint NATO to continue oppresses the ignorant population that have taken the situation like normal because that is the only these people has know from grandpa, parents and children. FARC would certainly defeated the Colombia tyranny if the USA would not come into its help.