Over 10,000 Evacuated in Canada Floods as Ottawa Mayor Warns ‘Worst Yet to Come’ 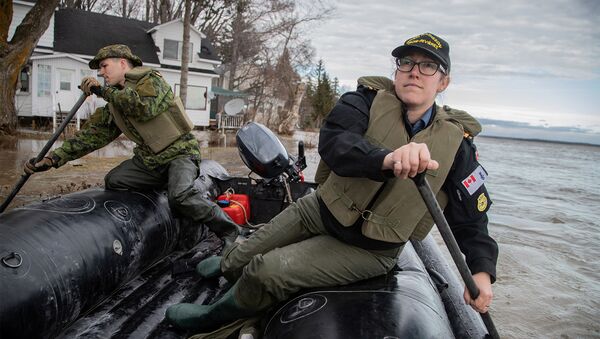 The evacuation comes after the Canadian capital Ottawa declared a state of emergency last Thursday, ordering 400 troops to be deployed to the city to help fight massive flooding which hit the east of the country.

More than 10,000 people have already been evacuated from their homes in flood-ravaged New Brunswick, Quebec and Ontario, according to CTV News.

The evacuation comes as Federal Public Safety Minister Ralph Goodale said that the situation in Ontario was “potentially worsening”, while in Brunswick, around 9,200 residences and cottages remain flooded along with 7,000 other properties.

In Quebec, the flooding, which was caused by extensive melting snow after a heavy winter, is already “stabilising”, Quebec Public Safety Minister Genevieve Guilbault told reporters; she added that “water levels are falling” and that city authorities hope that they “can protect the area”.

Officials in the capital Ottawa, in turn, said that they haven't ruled out that water levels of the Ottawa River and its tributaries may rise further “over the next several days”.

They recalled that the river is already 30 centimetres above the peak levels of massive flooding posted in 2017, and could go up another 20 centimetres depending on the weather in the coming days.

Ottawa Mayor Jim Watson, for his part, warned that “the worst is yet to come”.

Floods Kill 12 People on Spain’s Mallorca – Emergencies Service
The statement came after he pointed out that “we can no longer do it alone”, tweeting his “sincerest thanks” to troops arriving in the city as Ottawa declared a state of emergency last Thursday, ordering 400 troops to be deployed to the Canadian capital to help it grapple with flooding.

In a separate development, an operation is underway to rescue “a huge number” of pets from homes in the flooding-hit areas, CTV News cited Eric Dussault of Animal Rescue Network as saying.

“We're working with a list of hundreds of animals supplied by their owners,” Dussault said, adding that flooding is “incredibly stressful” on pets.