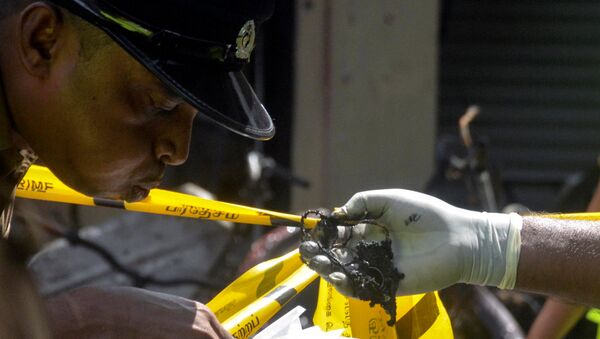 Sri Lankan authorities are carrying out raids across the country days after President Maithripala Sirisena assured of restructuring the security apparatus of the country.

New Delhi (Sputnik): As many as 108 Indian nationals have been arrested for flouting visa regulations since Tuesday as Sri Lankan security personnel carried out countrywide raids, the country's Department of Immigration and Emigration stated on Wednesday.

Most of the arrests were made during raids carried out in Sri Lanka's Aluthgama and Bentara areas. These people were reportedly engaged in construction work while staying in the island nation on tourist visas.

"Steps will be taken to deport at least 42 of the arrestees from the country on Thursday," the Immigration and Emigration Department said, while adding that others will be requested to immediately leave the country, said the Department.

'Foreign Mastermind' May Have Planned The Sri Lanka Easter Bombings - President
President Sirisena has advised the Commanders of the Tri-Forces and the police to deploy additional security personnel to safeguard all religious sites and schools, said the President's media division in a statement on Tuesday.

President Maithripala Sirisena has instructed the Commanders of the Tri-Forces and the IGP to deploy additional personnel to ensure the safety of all religious places and schools as necessary.

​On Tuesday, 13 foreign nationals, including 10 Nigerians were arrested from Watarapola area in Mount Lavinia and Welikada suburbs.

Saudi Arabia has advised its citizens to leave the island nation in the wake of intelligence inputs of terrorists planning fresh attacks ahead of the holy month of Ramadan.

Earlier this week, a member of the Sri Lankan parliament quoted a letter issued by police, saying that terrorists dressed in army fatigue had plans to launch attacks on Sunday or Monday.

Though there were no attacks on Sunday and Monday, Buddhist-majority Sri Lanka has remained on high alert since the 21 April attacks on three hotels and as many churches that left 253 people killed and over 500 injured. During a raid carried out jointly by the Army, Police and Special Task Force on Wednesday, at least  200 gelignite sticks were found in the Samanturai area of Sri Lanka. Security agencies also found three T-56 Magazines, seven shotguns, a detonator, 40 meters of wire, two pistols and a T-56 blank magazine.