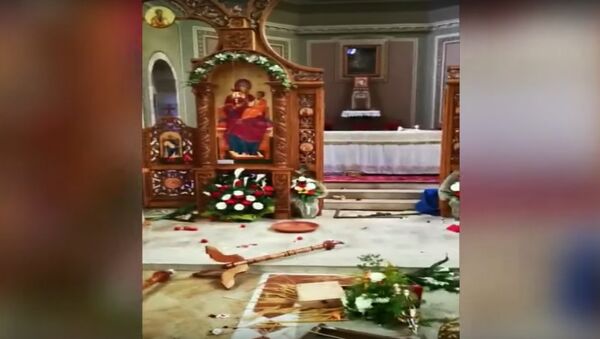 Two Romanian nationals trashed the church’s interior after late night Orthodox Resurrection Sunday celebrations at a Cesena Catholic church, where a local Orthodox priest has been granted the right to preach over the past few years.

A video emerged featuring the interior of an Italian church that appears as if it has been almost totally gutted over Orthodox Easter weekend, and it has swiftly made the rounds on the internet, with many assuming the attack had been carried out by some Muslim “people of colour”.

"Cesena, Italy: the demolished interior of the church… at the end, the colored offenders #RefugeesWelcome", one user wrote in Polish.

"They probably won't show it anywhere. Yesterday in Cesena", another butted in in Italian.

"Under the cloak of "madness and alcohol", 2 foreigners have profaned the Church of the # IstitutoLugaresi di #Cesena", another Twitterian posted captioning the viral video.

"Zero tolerance for those who believe they can come to Italy to commit crimes with impunity", another netizen posted on Facebook, with many more sharing a similar stance.

"We have to say enough! Enough for those who believe they can come here and do what they want!" internet user Stefano Maullu wrote.

"Two immigrants entered the church of the "Lugaresi", reducing it to this state. There are no words to describe so much barbarity…" Stefano Venturi weighed in.

The Romanians entered the Catholic temple of the Madonna della Misericordia del Lugaresi in Cesena, northern Italy, shortly after the celebrations of the Christian holiday, and according to Marco Censi, director of the Istituto dei Lugaresi, a local youth centre, vandalised the premises “breaking glass and some benches”, as Italian newspaper Il Resto del Carlino reported.

He went on to detail that the vandals had also cut themselves, acknowledging at the same time that Islamic extremists had “nothing to do” with the incident, thereby busting the initial social media speculation that the attack was carried out by Muslims.

Censi specified that the video was shot by a policeman standing in close proximity, and he “intervened” immediately “after the episode”, adding the pair was obviously drunk after Easter celebrations that went on until late into the night.

Orthodox Priest Silviu Sas, who has been permitted to use the premises of the Roman Catholic Church for Orthodox services for the past five years, weighed in saying he hadn’t noticed anything until the police called him, noting that after the liturgy and the blessing of food which lasted until the early morning hours, the believers went home.

“The church was granted to us by the Curia precisely because we keep it clean, in order, and we attend it three times a week, as agreed with Bishop Douglas”, he added, and said that it is the first time such an incident has occurred.

The incident comes as churches around the world have been alerted to take precautions after the deadly terrorist attacks in Sri Lanka over Resurrection weekend targeted Christians and tourists. It also comes in the wake of a number of anti-Christian attacks in Italy and neighbouring France over the past half a year. For instance, earlier in April, in Rome, a North African migrant stabbed a Georgian Christian in a street altercation after the Muslim noticed a crucifix on the Georgian’s chest.

Separately, anti-Christian vandalism has seen a general uptick in Europe recently: according to PI-News, a German news site, 1,063 attacks on Christian churches or symbols (crucifixes, icons, and statues) were registered in France in 2018 alone. Similar reports have come from Germany, where as many as four churches were vandalised and/or torched in March alone.

"In this country”, PI-News explained, "there is a creeping war against everything that symbolises Christianity: attacks on mountain-summit crosses, on sacred statues by the wayside, on churches… and recently also on cemeteries”.