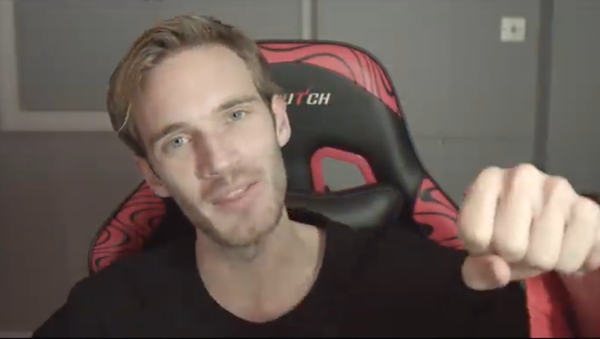 Following his half-a-year-long battle against the Indian music giant T-Series for the title of the most subscribed-to YouTube channel, Felix "PewDiePie" Kjellberg announced the end of the movement this weekend. The light-hearted rivalry has been tarnished by the defacing of a World War II memorial and the Christchurch massacre.

Although Swede Felix Kjellberg, also known as PewDiePie and king of YouTube, has called off the meme campaign "Subscribe to PewDiePie" in his months-long battle for top YouTube channel with media tycoon T-Series, his fandom does not seem eager to let it go.

The day after the vlogger announced to his followers about ending the hit movement to support him as the number one YouTuber, a photo of a plane flying over Manhattan with a banner "Subscribe to PewDiePie" emerged on Twitter.

​According to the Twitter account that posted the photos and video of it, the preparations for “International PewDiePie Day” began some time before PewDiePie’s call to stop the campaign.

​But even his surprise announcement over the weekend did not make the organiser cancel the flight on 29 April.

Kjellberg urged to call a halt to the campaign to support him as the number one YouTuber on 28 April, denouncing its now trademark phrase, which was later turned into a meme. The name of the campaign has additionally been dragged into several scandals.

Explaining his decision, he praised the efforts of his fan base, whose support was "humbling" for him, but also disavowed the efforts of "a few degenerates”. He noted that he had decided to end his campaign to prevent the actions of these few from casting a shadow on the rest of the community's efforts.

He brought up the case of a World War II memorial in New York being defaced with graffiti reading "sub to PewDiePie" and the Christchurch shooter, who used the phrase "subscribe to PewDiePie" as he streamed his attack on New Zealand mosques.

For the last half a year, PewDiePie has been in a neck-in-neck race to outpace the fast-growing channel of Indian music titan T-Series in the number of subscribers. Despite mobilising the efforts of other content creators and fans to keep his channel on top, T-Series eventually managed to steal the crown from him.