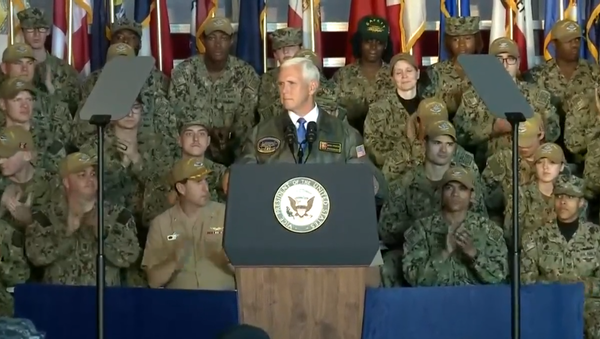 Before US Vice President Mike Pence took the podium to address the sailors of the USS Harry S. Truman Tuesday, the members of the armed forces were reportedly given particularly puzzling instruction on how to welcome the VP.

On Tuesday afternoon, Pence traveled to Norfolk Naval Base in Norfolk, Virginia, to deliver a message from US President Donald Trump while also recognizing the 2,000-plus missions the USS Harry S. Truman and its 7,500 sailors have been a part of in the past year.

Prior to Pence's speech, however, it was an order regarding servicemembers' applause that took Twitter by storm.

According to WTKR-TV reporter Brendan Ponton, US Navy sailors toward the rear of the address were given a particular set of instructions in clapping for the veep.

Sailors being instructed to “clap like we’re at a strip club” when VP arrives (not kidding) https://t.co/7NquC4wNxw pic.twitter.com/gUqYtOGiuc

Clapping… in a strip club?

While the order may seem like machismo or a way to encourage fellow servicemembers, many netizens were quick to clap back at the comment and question what it actually meant.

People don’t clap at strip clubs. But what they do does rhyme with “clap”. pic.twitter.com/Tnd4md2Kw6

For the record,.. I have never heard anyone clap at a stripclub

I've never been to a strip club, but clapping seems like an odd response if I were to go to one.

Others clutched their pearls at the thought of Pence, or his wife Karen, referred to as "Mother," catching wind of the orders.

Mother is not amused!

A number of netizens were just turned off by the alleged applause order.

The rest simply treated the odd phrase as a little shade toward both the administration and Pence.

I’m sure the VP would approve of that strip club comment lmao but it’s perfectly appropriate for this dumpster fire Admin….

So they gave Pence the Naval Clap, wonder how may weeks on penicillin that will take to clear up.