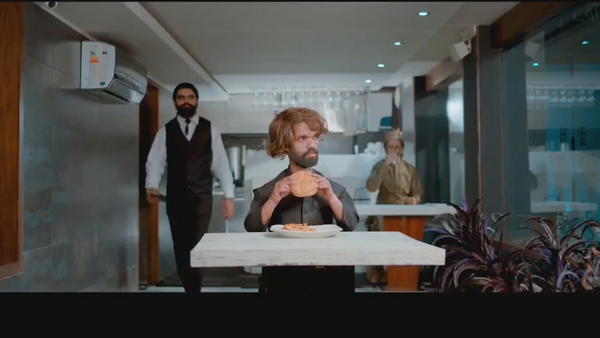 An ordinary Pakistani waiter has unexpectedly taken social media and news headlines by storm after someone spotted his striking resemblance to Game of Thrones actor Peter Dinklage, who stars as Tyrion Lannister in HBO’s epic series.

Rozi Khan, who has been dubbed Peter Dinklage/Tyrion Lannister’s doppelganger, has made his acting debut in a Game of Thrones-inspired advertisement for a Pakistani food delivery service, Cheetay.

The ad shows Khan, apparently wearing a wig to look precisely like his Hollywood double, sitting and trying to enjoy his meal in different restaurants, but always being interrupted by annoying staff members or customers who either ask for a photo and an autograph, or make references to Game of Thrones.

In one scene, a waiter is seen approaching him to ask about the series’ ending, while in another, a fan, which seems to be wearing a chef’s uniform, pretends to be shivering when citing one of the most iconic lines from the epic saga: “Winter is coming”.

Another scene shows a waiter bring Khan his bill and repeating the well-known Lannister-related phrase: “I heard you always pay your debts”.

The video, which is titled “Food is Coming”, is already making waves on social media:

It features our very own Lannister aka Rozi Khan from Rawalpindi.

P.S Turn on the subtitles

26-year-old Khan had never heard of the record-smashing HBO show until random strangers started asking for a selfie with him – that is when he shot to fame. Apparently, he’s pretty happy about it, as his fortunate looks have given him – a waiter – quite a career boost.

“I don’t mind. A lot of my pictures have been taken, that’s why I have become very famous everywhere. Wherever I go, someone says to me: ‘Sir, who is this man with you on Facebook’, I say that he is my friend. ‘He looks like you’. I tell them he is my brother. It’s not a bad thing”, he said of multiple photos on the Internet comparing him to Dinklage.

Both men are said to be about 135 cm tall and definitely have similar features, and with all the hype around HBO’s super show, no wonder Khan has become an Internet sensation.

In fact, he has revealed that he would love to meet Dinklage, who plays the witty and noble Tyrion, in person; he likes him a lot, mainly because they’re both the same height.