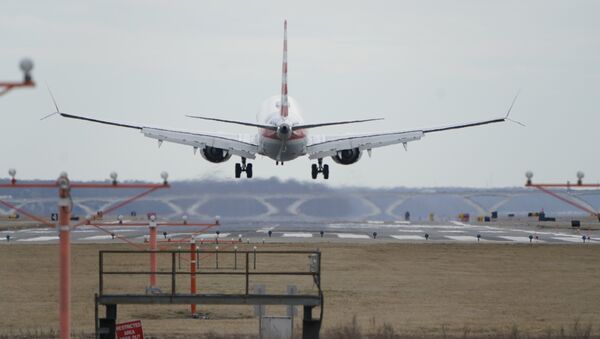 The Wall Street Journal reported Wednesday that Boeing failed to inform Southwest Airlines and other carriers that a safety feature on the Boeing 737 Max 8 aircraft that warns pilots about malfunctioning sensors had been deactivated, also noting that Federal Aviation Administration (FAA) inspectors and managers were unaware of the deactivation.

​According to the Wall Street Journal, Boeing didn't tell Southwest Airlines or other carriers that were flying its 737 Max 8 jets that malfunctioning sensor safety features, which were components of earlier models of the plane, had been deactivated on the new models, citing government and industry officials familiar with the matter.

In addition, FAA safety inspectors and supervisors for Southwest, the airline carrier which purchases the most Boeing 737 Max jets, were not notified of the deactivation of the safety feature, which is supposed to inform pilots about whether a sensor, namely the "angle-of-attack vane," is providing incorrect data about the angle of the plane's nose to the pilot.

In both crashes, the plane's new flight control feature, the Maneuvering Characteristics Augmentation System (MCAS), has been implicated as a cause. The MCAS, initially designed to be a safety feature, is supposed to evaluate sensor data and push the plane's nose down to keep it from stalling in the event that the nose of the plane reaches too high of an altitude.

"I think it's absolutely egregious, because in these new, highly automated aircraft, you absolutely need to know what information is being fed to your computer. Computers are dumb and dutiful, and if you don't know what the angle-of-attack [vane] is telling the flight computers, you can be in deep trouble real quickly. Obviously this is a marketing issue. I've said before, Boeing let their marketers get ahead of their engineers, and it sounds like they wanted to convince their airline customers that the 737 Max will fly just like the previous aircraft 737-NG," Diehl told hosts John Kiriakou and Brian Becker, referring to an earlier model of the Boeing plane.

According to a Southwest spokesperson who recently spoke to the Wall Street Journal, the carrier was under the impression that the safety feature was "operable on all MAX aircraft" before the Lion Air crash, also noting that Boeing "did not indicate an intentional deactivation."

"It's all a case of marketing leading everything else, leading the engineers as well. And this is one reason why external regulation has evolved. I think we can take ourselves right back to a well-known accident: the sinking of the Titanic. And why did so many people drown? Amongst other reasons, they had about half as many lifeboats on the boat as they had people. You realize why these things happen when you don't have external regulation compelling this. And in the US, unlike Europe, America [believes] that the industry should self-regulate. And Boeing itself is actually allowed to self-certify. I think this shows what happens when self-certification is driven by marketers rather than engineers," Keen noted.

However, despite the fact that hundreds of people died in the crashes, it's unclear whether Boeing will face any criminal charges or serious repercussions, according to Diehl.

"Normally, air safety investigators do not get involved with the criminal aspects. In this country, the [US] Department of Justice will have to make that decision, not the National Transportation Safety Board. The FAA could revoke the so called ‘type certificate,' which is needed for Boeing to produce these aircraft, which I think is very unlikely. I don't know if you would call that criminal, but it's a serious action. After all, they've got $600 billion worth of contracts on the 737 Max. Serious actions could occur. Clearly, this is unusual. Pilots always thought they know what was going on with the Boeing equipment. This came as quite a surprise," Diehl explained.

According to Keen, the 737 Max is the likely product of Boeing competing with European multinational aerospace corporation Airbus. In fact, the 737 Max is a direct market competitor to Airbus' A321LR. Multiple reports speculate that Boeing rushed to market the 737 Max in an attempt to beat out its rival. In an effort to use larger, fuel-efficient engines, like Airbus, Boeing engineers realized that the older model 737-800 needed engineering changes. However, instead of designing an entirely new plane, Boeing engineers simply slapped a more fuel-efficient engine to the front of the 737-800 and gave it a new name: the 737 Max.

When Boeing engineers realized that the position of the larger engine would cause the plane to stall by tilting the nose of the plane too high, they installed the MCAS in the 737 Max "to compensate for the extra pitch produced by its larger engines at elevated angle-of-attack," the Wall Street Journal reported.

"I think it goes back to the original designers of the 737 Max, because this was brought out in a competition with an Airbus plane, where Airbus actually beat them in that particular market segment, and Boeing faced the dilemma that if they went through releasing what was an entirely new plane, they would have to go through a whole new certification and training process," Keen explained.

"The decision was made to take an existing plane and put larger engines on it, and that led to a whole cascade of changes, again. But putting a heavier engine on, which had a lower clearance, which meant it had to to be mounted off the wings," with each change to the design causing new issues to arise, Keen said.

"And all these things were happening and changing the nature of the plane, [with Boeing] pretending that the plane hadn't changed to avoid the extra expense of having to certify an entirely new design. They don't want to have to train the pilots to say that they are flying a new airplane."