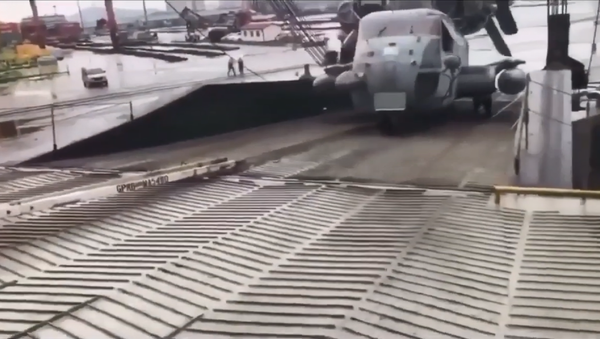 Look out! That helicopter just broke loose and is rolling backwards off the ship!

It's a terrifying moment on this gangway as the tow bar pulling a US Marine Corps CH-53E Super Stallion onto the ship suddenly fails, sending the transport chopper rolling backwards — and people scattering in panic.

Pentagon’s King Stallion Chopper at ‘High Risk’ of Remaining Sidelined
The video was posted by Facebook page Air Force amn/nco/snco on April 26, and titled simply "OOPS." It's unclear where the episode took place, but by Tuesday the video had been seen 115,000 times.

The big chopper weighs an impressive 23,628 pounds and is among the largest such aircraft on the planet, yet somehow nobody was inside it riding the brakes to make sure this didn't happen? Oops indeed!

However, perhaps the most fruitless exercise is by the man who runs after the chopper as it begins to roll away.