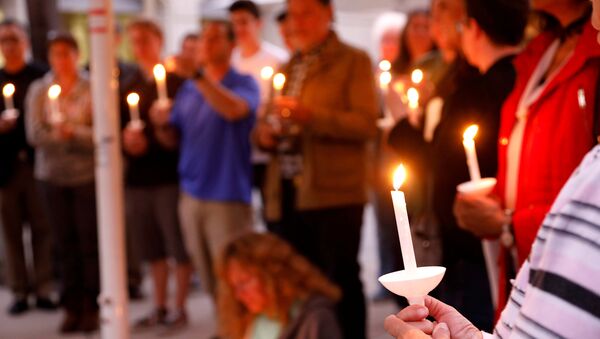 © REUTERS / John Gastaldo
Subscribe
The injured rabbi made the comment about the incident in an interview less than 24 hours after the shooting that left one dead and three injured on Saturday.

Rabbi Yisroel Goldstein, who was injured in the Saturday shooting in a synagogue in San Diego, California, said his congregation will not be "intimidated or deterred" by the incident, according to a report by The Hill.

A 19-year-old shooter killed one and injured three, using an AR-15 rifle in the Chabad of Poway synagogue, on the last day of Passover, a Jewish holiday.

"The Constitution of the United States guarantees freedom of religion for all faiths. And we are so grateful to live here in this country that protects our rights to live openly and proudly as Jews," Goldstein told NBC.

"One thing's for sure. I guarantee you, we will not be intimidated or deterred by this terror," he added. "Terror will not win."

California Synagogue Shooting Victim Threw Herself in Path of Bullets
Goldstein sustained injuries to his fingers as he raised his hands in protection during the shooting. One woman, Lori Gilbert Kaye, was killed as she reportedly threw herself in the path of bullets to save the rabbi from the shooter. Two Israeli nationals — an 8-year-old girl and her uncle — were also injured during the incident.

"This is her legacy. It could have been so much worse. If the sequence of events didn't happen the way they happened, it could have been a much worse massacre," he said about the woman. "Yesterday, in this horrific terrible event that has occurred here, in my own interpretation, Lori took the bullet for all of us. She died to protect all of us. She didn't deserve to die. She's such a kind, sweet-hearted — just a good human being. She didn't deserve to die right in front of my eyes."

Rabbi Yisrael Goldstein says he will never forget the #PowaySynagogueShooting, “My missing finger will forever scar me physically but it’s going to remind me how vulnerable we are and also how heroic each one of us can be.” @KNX1070 pic.twitter.com/RN6IEGHKdc

​Speaking about the shooter, Goldstein admitter he "cannot erase that face from [his] mind."

"I walk two, three, footsteps when I hear a loud ‘bang,'" he said. "I thought Lori may have fallen or the table tipped over in the lobby."

When the shooter's rifle "miraculously" jammed in front of rabbi's face, the criminal fled the scene, but was apprehended by the police shortly afterward.

This is Rabbi Yisroel Goldstein. He was leading service when he was shot in the hand by a gunman at the Chabod of Poway just north of @SanDiego, CA

He told more than 100 at the #synagogue, “We are strong. We are united they can’t break us.” HE REFUSED TO STOP THE PASSOVER. pic.twitter.com/QssgV0vwRy

​According to media reports, as the suspect fled the scene in a car, an off-duty border patrol agent who was at the service, tried to shoot the attacker. He didn't hit the shooter, but he did hit his car. According to Rabbi Goldstein, he himself had asked the agent to carry the gun in the synagogue.

"You work for the border patrol, please arm yourself when you are here, we never know when we will need it," the rabbi recalled he had asked the agent, when the latter started attending services.

The suspect, identified as John Earnest, was charged on Sunday with one count of murder in the first degree, and three counts of attempted murder in relation to the shooting, which authorities describe as a hate crime, a report by The Hill says.