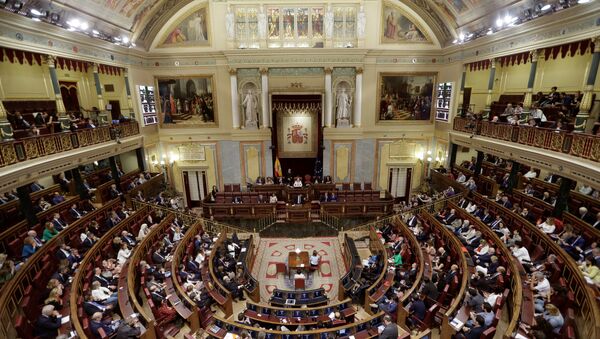 © AFP 2021 / Emilio Naranjo / POOL
Subscribe
MADRID (Sputnik) - The centre-right Citizens party won't enter into any coalition agreements with the Spanish Socialist Workers' Party (PSOE), which won Sunday snap parliamentary elections, as it sees its talks with Catalan and Basque nationalists as unacceptable, Ines Arrimadas, one of the centrists' leaders said on Monday.

"One must be sincere: [Prime Minister and PSOE leader Pedro] Sanchez already has a government with [Pablo] Iglesias, [the leader of the Unidas Podemos alliance], and the support of nationalists. Everyone knows that. As for our decision, there has been no debate today. Citizens cannot strike any agreements with those that have entered into agreements with [Catalan President Quim] Torra, [Basque nationalist] EH Bildu [party] and [former Catalan leader Carles] Puigdemont", Arrimadas said at a press conference.

She also noted that that the Citizens party would lead the opposition in the lower house of the Spanish parliament after the Christian Democratic People's Party lost a record number of votes in the elections.

"The People's Party must think why it has lost 71 seats," the politician added.

Spanish PM Says Ready to Hold Talks With Other Parties to Form New Government
The People's Party indeed came second with only 66 seats, down from 137 mandates it had in the previous parliament. The Citizens party has, meanwhile, secured 57 seats, while the far-right Vox party has obtained 24 seats.

PSOE, in turn, has secured 123 out of 350 parliamentary seats after almost all votes were counted. Thus, the party, as it was predicted, failed to obtain an absolute majority of 176 seats to independently approve a prime minister and has to form a coalition with other parties. The left Unidas Podemos alliance that received 42 seats has already expressed readiness to form a coalition with PSOE.